Below is a summary of the episodes:

Episode 1 - Rhapsody of the Desert
Arzak is in deep meditation at the heart of the Desert "B" when his faithful Ptéroïde picks him up for his first mission: to restore the magical order of the universe. A visit to the Soul Tower of the Winds is required, but our hero has no idea that it will open a door of some strange invisible dimensions...

Episode 2 - The Morning Shadow
When flying over a mountainous particularly dangerous area, Arzak is hallucinating: the shadow of a rock turns into a monstrous jaw. Turning into a large canyon, he discovers a stone tower, apparently deserted. He decides to stop when the first shadows of the night are catching up...

Episode 3 - Stardust Resort
Arzak follows Highway 88 crossing the Desert "B" when he encounters a red racing too fast for his brave Ptéroïde. He was just time to see the blue eyes of the driver who mocks him. The lone warrior continues to the Stardust Café, but he is not the only one in the race...

Episode 4 - The Beautiful Repairer
Dawn is breaking on Desert "B". Arzak discovers that his Ptéroïde is held prisoner in the canvas of a powerful scorpion . Meanwhile, in the aisles of a carnivorous garden, a woman driving a strange vehicle responds to a call. Her mission: repair the mechanisms of people she never sees...

Episode 5 - The Poison Pearl
While trying to escape two hungry demons, and the Louff Rydane, Arzak is hit in flight by an venomous arrow-snake whose effect is unpredictable. While the Louff prepares to cook, our unconscious hero comes in contact with the spirit of venom...

Episode 6 - Heart of Monkey
Some winter nights, the Desert "B" sees huge resurgence of carnivorous grass fields. At the shelter on top of a ruined arch, Arzak plays a tune on the flute which echoes the heartbeat of a big monkey hanging in the air. An image is formed in the mind of the warrior: that of a woman at the seaside. The animal's fate hangs by a dream... 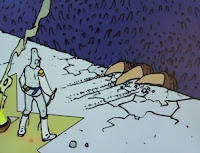 Episode 7 - The Lost City
Arzak is walking in the streets of a ruined city without meeting a soul. Around him, everything is abandoned skyscrapers, rusted car bodies, apartments immersed in silence. The city appears deserted until the warrior hears a mysterious voice singing an old tune...

Episode 8 - The Ninth Goddess
Arzak travels aboard a spaceship on the orders of two aliens: Delano and Xnobol. Inside, the warrior discovered a sarcophagus containing a goddess struck by a serious illness. Guided by the instructions and Xnobol Delano, with competing theories, Arzak will try to save the entity...

Episode 9 - The head of the Warrior
Arzak is resting at the Inn of the Green Mountains along with Pearl, a very attractive young woman. But the warrior did not suspect that his girlfriend is acting on behalf of a power hungry alien. This is the King, and he is assisted by his mad scientist-sorcerer. Has she put a price on Arzak's head?

Episode 10 - The Cloud Tower
Without the new guardian of the Cloud Tower to protect it, Arzak decides to go there. Once inside, he discovers that the time has stopped. Even Baluga, the robot concierge, has broke down. But where is the Mistress? Is the tower occupied by an invisible force?

Episode 11 - Noshka
Noshka, the secret soul of the Desert "B", was abducted by a monstrous Jinn. Arzak is charged by the Governor Block to rescue her with the aid of a magical key to open parallel dimensions, except that the key is hanging on the neck of the sleeping monster. Will Arzak retrieve it and deliver Noshka from the claws of the monster?

Episode 12 - The Gamesman
Seeking the release from a labyrinth in which he is a prisoner, Arzak came face to face with dangerous creatures. Fortunately, the last of Ptéroguerriers still has his sword. The fights continue until Arzak is seriously injured. Do unseen forces control our hero?

Episode 13 - The Ring of Broken Hearts
Flying on a rainy night over the carnivorous grass fields, Arzak seeks shelter. A ring-shaped stone broken construction, appears in the middle of the deadly plants. Tired, Arzak decided to establish his camp. But the night is long and our hero should not fall asleep too easily...

Episode 14 - The Secret of the Unicorns
Arzak wakes with a start. He has just seen his own death in a terrible nightmare. He must seek advice from the unicorns before it is too late. Our hero soon finds himself on board a strange ship en route to a parallel world. Will it change the course of his destiny? 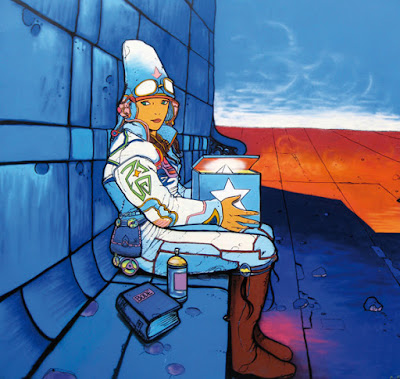