Nintendo is bringing Pokémon to the real world 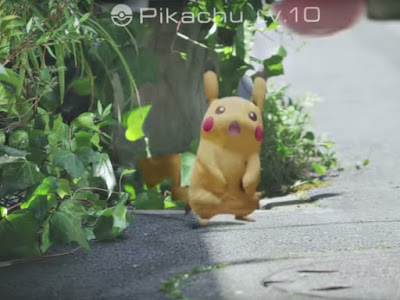 P O K E M O N   G O
[Source: BusinessInsider] It's every Pokémon fan's fantasy. What if your Pokémon weren't restricted to the glowing rectangle in your palm or on your television screen, but were out roaming through the world?

Nintendo just announced "Pokémon Go," an augmented reality game for Android and iOS to be released in 2016. Players will be able to catch, battle, and trade Pokémon in the real world. Location-based technology will ensure that specific Pokémon are only found in certain places, just like the other games in the franchise.

"Pokémon Go" will be free to start but may have in-app purchases.

Nintendo also made a Bluetooth gadget called Pokémon Go Plus. The gadget offers features that will make playing the game smoother and will let you play without having to look at your phone. Pokémon Go Plus will "glow and vibrate when you walk somewhere in the real world that corresponds with somewhere in Pokémon Go's virtual world," according to The Verge.

Nintendo made a video demonstrating what playing "Pokémon Go" could look like. Check it out: