Attack on Titan for Sony PlayStation 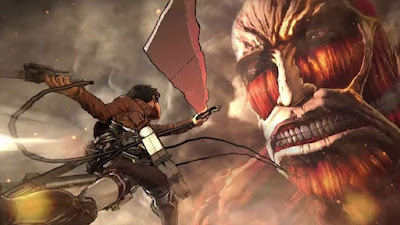 A T T A C K   on   T I T A N
P L A Y S T A T I O N
[Source: blastr.com] Here's a peasant-swallowing, appendage-amputating preview of the upcoming Attack on Titan videogame by Koei Tecmo, based on the insanely popular Attack on Titan anime empire.  The savagery and blood of the series has been injected into this gory gaming adaptation, with rampaging Titans under attack from airborne squads of lethal, sword-slashing scouts from the Survey Corp.

"Having evolved from a manga/anime series to an internationally recognized brand, we were enchanted by the opportunity to create our own take on humanity's last stand against these overwhelmingly powerful beings, the Titans," said KT president Hisashi Koinuma last month.  "Our studios are already pouring all of their passion and excitement into it, and we hope to reveal more information soon!"

Brace yourself for the assault and let us know if you're excited to join the battle against these behemoth brutes.