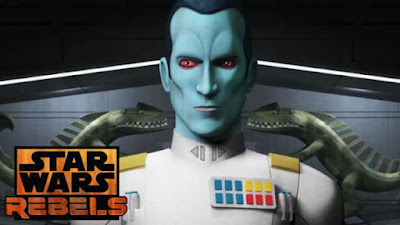 New REBELS Trailer Finally
Kills The Expanded Universe
[Source: YahooNews] Now that Thrawn is to be reintroduced into the canon in Star Wars Rebels Season 3, we can finally declare the Star Wars expanded universe dead, once and for all. And let us never mention the Yuuzhan Vong again.

On April 25, 2014, Disney delivered the killing blow, reducing all Star Wars Expanded Universe material to a fiction’s fiction called Star Wars Legends. The move was not received well by a segment of Star Wars fandom, who insist there are diamonds in those non-canonical hills. The most often cited asset in the expanded universe must be Grand Admiral Thrawn, the main enemy of the New Republic in the years after Star Wars: Episode VI Return of the Jedi.

Introduced in Timothy Zahn’s Heir to the Empire, Thrawn attempted to destroy the new galactic government with the help of a pompous, dark Jedi clone and loads of ysalamiri: dumbass lizards with the power to suppress the Force. It is approximately as stupid as it sounds, but Thrawn himself was engaging: a master tactician whose cold calculations contrasted with the passions and personal animosities that steered Darth Vader and Emperor Palpatine through the Star Wars movies. Thrawn was the bad guy Grand Moff Tarkin could’ve been, if he had only evacuated the Death Star in time.