Anime trailer for "Mary and the Witch's Flower" 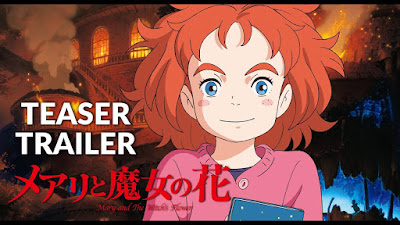 Mary and the Witch's Flower
This is an upcoming Japanese anime fantasy film directed by Hiromasa Yonebayashi and produced by Studio Ponoc, based on The Little Broomstick by Mary Stewart. This is Studio Ponoc's first feature film. The film tells a story of a young girl named Mary who discovers that she has a mysterious power to become a witch which lasts for one night only.
Release Date: 7/8/2017 (Saturday).
Roadshow Official Site:http://www.maryflower.jp
(C) "Mary and the Witch's Flower" Production Committe.
Posted by anim8trix at 12:00 AM