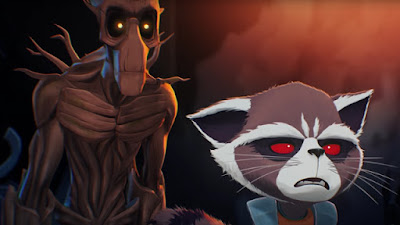 R O C K E T  &  G R O O T
[Source: Syfy] There's already an animated Guardians of the Galaxy series on Disney XD, and now that show is getting an online spin-off that focuses on Rocket and Groot.

The pilot finds Rocket and Groot having a bit of engine trouble with their ship, which lands then in Broker's Junkyard. But instead of fixing up their old clunker, Rocket spots a shiny new ship. He just doesn't actually have any credits in the bank. Hmm ...

The series is set to run for 12 webisodes, with new installments dropping over the next few weeks.

The show is rolling out on the Disney XD media channels, but don't let that fool you. The hybrid, cel shading animation is top-notch, and this series looks like it could be a fun little distraction for kids and adults alike. As /Film notes, Rocket comic artist Skottie Young also consulted on the character designs for the shorts and his influence certainly comes through. The characters are voiced by the same folks who bring them to life in the Guardians animated series, Trevor Devall (Rocket) and Kevin Michael Richardson (Groot).

The entire Rocket & Groot web series is set to be available by April 10. In the meantime, check out the first episode below.
Posted by anim8trix at 12:00 AM

Email ThisBlogThis!Share to TwitterShare to FacebookShare to Pinterest
Labels: animation, cgi, Guardians of the Galaxy