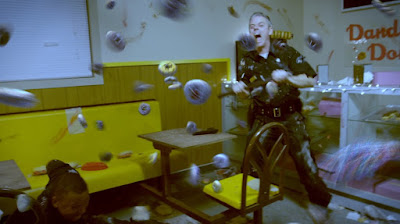 ATTACK of the KILLER DONUTS
[Source: Syfy] There are few things more bizarre than taking an inanimate object, giving it teeth, and setting it out into the world on a bloody rampage. Attack of the Killer Tomatoes brought us tomatoes; Rubber gave us a killer car tire; Death Bed: The Bed That Eats gave us, well, a bed that eats human flesh. And now we have killer donuts to contend with.
In Attack of the Killer Donuts, there is, somehow, a chemical spill in a donut shop (who is bringing chemicals into a donut shop?!) that causes the donuts to turn into blood-thirsty little pastries with teeth. Who wants to call the police and tell them an "army of killer donuts" is on the loose? The cheesy acting and uninspired trailer aren't much to look at, but the sentient donuts are beautifully created - even kind of adorable - which makes Attack of the Killer Donuts destined to be a weird cult favorite.

The film is the directorial debut from VFX supervisor Scott Wheeler (Mega Shark vs. Giant Octopus), so it is no surprise that the donuts look so good. The film stars Justin Ray (Disaster L.A.), Michael Swan (Friday the 13th part VI), and Kayla Compton (Highway to Havasu). It will be released on November 17.
Posted by anim8trix at 12:00 AM