And the title of the new Han Solo Movie is.... 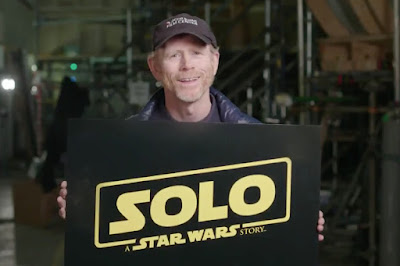 SOLO: A Star Wars Story
[Source: TheVerge] Up to this point, we’ve been forced to call Disney’s next standalone Star Wars film the cumbersome “as-of-yet-untitled Han Solo film.” Well, no longer. Today, director Ron Howard announced that the film had finally wrapped production, and that it would simply be called Solo: A Star Wars Story.

There have been rumors for a couple of months, after Making Star Wars got their hands on a picture of a crew T-shirt. The production’s working title was Red Cup, which now makes sense given that the real-world Solo company produces, well, red cups. The movie is said to follow the early days of Han Solo, well before he met up with Luke Skywalker, Obi-Wan Kenobi, and a pair of droids in A New Hope. We don’t know much about what that story will entail, although Howard has alluded to locations like Corellia (Solo’s home planet) and Kessel (where he made the infamous Kessel run). The film will also include Tag and Bink, a pair of characters familiar to hardcore fans of Star Wars comics.

The film follows the mold of 2016’s Rogue One in that it’s a standalone installment of the franchise that tells a self-contained story, rather than tying directly into the larger Skywalker saga. Unlike its predecessor, however, Solo is all about a group of characters who audiences are already well familiar with.

Solo has hit some significant bumps in the road thus far. In June, directors Phil Lord and Christopher Miller were fired due to “creative differences” five months into the film’s production. Howard replaced them soon after.
Solo: A Star Wars Story will hit theaters on May 25th, 2018.
Posted by anim8trix at 12:00 AM