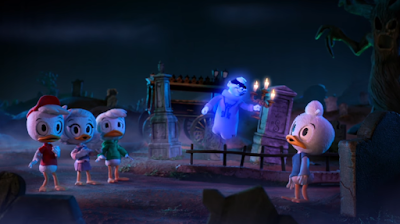 DuckTales! Boo-oo!
Remember when we first reported that Disney XD was bringing back DuckTales for the first time since 1990? Remember how happy we all got? How suddenly, everything seemed right with the world? Well, things are getting even righter, because Huey, Dewey, Louie, and Webby (Danny Pudi, Ben Schwartz, Bobby Moynihan, and Kate Micucci, respectively) are about to visit the Haunted Mansion.
For those who don’t frequent Disney theme parks, the Haunted Mansion is a staple at Disneyland, Magic Kingdom, and Tokyo Disneyland, where “999 happy haunts” happily spook riders in their “Doom Buggies.” So it’s pretty exciting that Disney XD just released this new clip promoting the DuckTales upcoming Halloween special, which shows our fearless heroes seeking out the “Ghost Bride’s wedding ring” in the shadows of the haunted manor, then shaking in their tails at the site of residents, Baby Boo and Hatbox Ghost.


With the DuckTales reboot already flying high, you may have noticed that this promo short doesn’t look much like the show it’s promoting. There’s a reason for that, this stop-motion vid represents the combined work of Disney XD, Walt Disney Imagineering, and Stoopid Buddy Stoodios, the folks behind Robot Chicken and SuperMansion.

Want even more world-righting news? This isn’t the only short they created. According to Mashable, we’ll be seeing these promos all month leading up to the Halloween special, with various Haunted Mansion Easter Eggs hidden throughout, “including original music, sound effects and production design from the ride.”
Posted by anim8trix at 12:00 AM