THE FALL of POP CULTURE 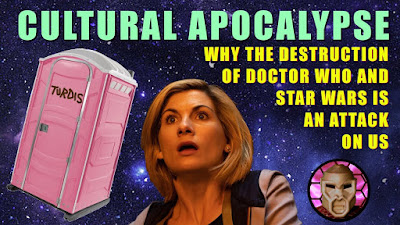 The Collapse of Star Wars, Star Trek, & Doctor Who
And the Entitlement of the Media Complex
In the last few years, we have witnessed the implosion of some previously very popular entertainment franchises; franchises that go back decades, and have become institutions in their own right. Institutions like Star Trek. Star Wars. And Doctor Who, the most recent to implode.

On February 14th, the BBC, home of Doctor Who, put out an article which pointed out the rising influence of fans, all while bemoaning what they call “fan entitlement”. But after fans really the entitled ones?

In the aftermath of the destruction of Doctor Who, @AndreEinherjar will go through this article and give his response to the accusation that fans somehow are the entitled ones.
▶ Watch the Video
Posted by anim8trix at 12:00 AM