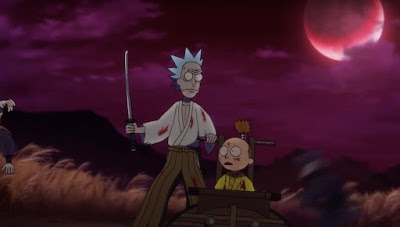 
The short stars Youhei Tadano as "Rick WTM72," and Keisuke Chiba as "Shogun Morty." The pair reprised their roles from the Japanese dub of the animated series. Jason DeMarco, senior vice-president and creative director for Adult Swim, posted on Twitter on Saturday that his team "spent a year putting together a five minute Rick and Morty Lone Wolf and Cub anime short."
Posted by anim8trix at 12:00 AM