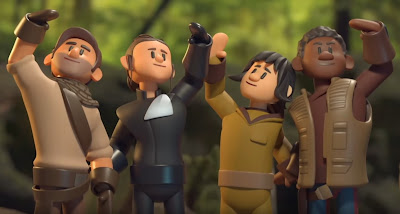 What if Disney made Colin Trevorrow's
Duel of the Fates?
Before JJ Abrams came on board for Star Wars: The Rise Of Skywalker, Collin Trevorrow was slated to direct his own version, Duel Of The Fates. Vastly different to the Episode 9 that we ended up with it included no Emperor Palpatine, his Master Tor Vallum (using concepts from a cut character from the JJ version) more Rise Tico and General Leia, a double-sided lightsaber for Rey, Kylo Ren as the main protagonist and about the same amount of the Knights Of Ren we actually got. There’s also a Finn Stormtrooper uprising plot that unfortunately I cut due to time and money constraints. And please check out Ethan who lovingly animated this at https://twitter.com/ethataylo and thanks for watching.
▶ Watch the Video
Posted by anim8trix at 12:00 AM