STARGIRL - A New Generation of Justice 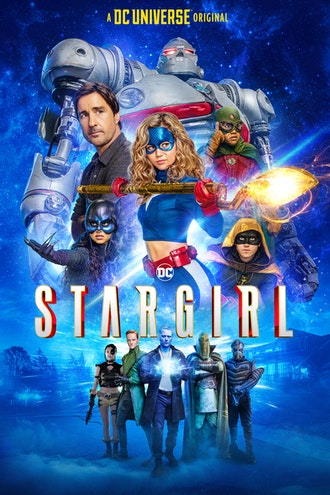 S T A R G I R L
It began when Ted Knight created the Cosmic Staff. After receiving the Staff, Sylvester Pemberton retired his teenaged alias of the Star-Spangled Kid and reinvented his alter-ego as Starman. He became trained and fully-equipped with the Cosmic Staff, as it had deemed him honorable and courageous enough to allow him to wield it. Unfortunately, their bond would be broken ten years ago Christmas Eve after he succumbed to Icicle's fatal attack, entrusting his sidekick and best friend Pat Dugan with its care until the Staff would someday choose their successor to lead a new generation of fearlessness, hope, and heroism. In the meantime however, Pat stored it away in a trunk for the years to come.

But that day would come in the present where Courtney Whitmore would uncover the Staff as it glowed excitedly in her presence after she discovered her stepfather's secret double life as a past sidekick and what caused the fall of the Justice Society of America. Noting as it glowed whenever her hands came near it, the Staff had officially chosen its new handler. It soon began to show its anti-gravity beam paired perfectly with the girl's gymnastics. With a mentality of its own to help Courtney train in the wake of a rise of new villainhood, the Staff becomes not just a weapon, but a mentor of its own to a girl destined to continue a legacy.
▶ Watch the Trailer
Posted by anim8trix at 12:00 AM