Thunderbirds Are Go: Voyage to Mars

T H U N D E R B I R D S
A R E    G O
V O Y A G E  to  M A R S
In 2065, the first manned mission to Mars is launched from Glenn Field in the form of the spacecraft Zero-X. Unknown to Captain Travers and his four-man crew, master criminal the Hood has stowed away on board to photograph Zero-X's wing mechanism. Shortly after lift-off, the Hood inadvertently traps his foot in the craft's hydraulics, jamming them and causing Zero-X to go out of control. As the astronauts eject in the escape pod, the Hood extracts his crushed foot and parachutes to safety from the undercarriage. Zero-X crashes into the ocean and explodes. 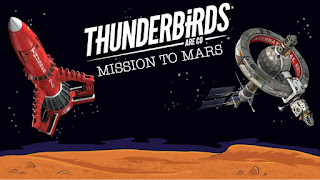 In 2067, the Inquiry Board of the Space Exploration Center concludes that Zero-X was sabotaged. Meanwhile, a second Zero-X has been built and another mission to Mars planned. International Rescue agrees to provide security at the launch given the possibility of further sabotage. Jeff Tracy dispatches Scott to Glenn Field in Thunderbird 1 to monitor the situation from the ground, while Virgil and Alan are assigned to escort Zero-X through the atmosphere in Thunderbirds 2 in 3. Posing as a reporter at the pre-launch press conference, Lady Penelope arranges for each member of the crew to wear a St Christopher brooch with a concealed homing device. On launch day, Dr Grant's device is no longer registering, even though Grant is on board Zero-X awaiting lift-off. Scott unmasks "Grant" as the Hood in disguise. The Hood flees Glenn Field in a car, pursued by Penelope and Parker in FAB 1. Reaching the coast, he transfers to a speedboat and then a helicopter. Parker shoots down the helicopter with FAB 1's machine gun. Meanwhile, the kidnapped Grant is found and returned to Zero-X and the spacecraft is launched without further incident.

Mission complete, Penelope invites Scott and Virgil to join her at popular nightclub The Swinging Star. Returning to Tracy Island, Alan feels unappreciated when Jeff insists that he stay at base while the others spend the night partying. Asleep in bed, Alan has a surreal dream in which he and Penelope travel to another Swinging Star located in space. Appearing at the nightclub are Cliff Richard Jr and The Shadows, who perform a song called "Shooting Star" and an instrumental called "Lady Penelope". The dream ends when Alan falls out of The Swinging Star and back to Earth, waking to discover that he has merely fallen out of bed.

After a six-week flight, Zero-X reaches Mars on 22 July and all of the astronauts except Space Navigator Newman touch down the planet in their lander, the Martian Exploration Vehicle. Investigating the surface, the men are puzzled to find strange, coil-like rock formations. Space Captain Martin destroys one of the structures with the MEV's gun and Dr Pierce prepares to go outside to collect samples. The other structures come to life, revealing themselves to be one-eyed rock snakes. The aliens bombard the MEV with fireballs from their mouths, forcing the astronauts to take off prematurely. Docking with Newman in orbit, they start back to Earth.

As Zero-X re-enters Earth's atmosphere on 2 September, a lifting body fails to connect with the spacecraft and damages various systems, including flight control and the escape pod circuit. With the astronauts unable to eject and Zero-X set to impact Craigsville, Florida, Jeff launches Scott and Brains in Thunderbird 1 and Virgil, Alan and Gordon in Thunderbird 2. Craigsville is evacuated. Lifted into Zero-X's undercarriage, Alan repairs the escape circuit under Brains' guidance. Seconds before impact, Alan completes his task and jumps out as the astronauts eject. The empty Zero-X crashes into Craigsville. Picked up by Penelope and Parker in FAB1, Alan is driven to the real Swinging Star where Penelope, joined by the Tracy family, Brains and Tin-Tin, toast Alan as a hero.

Email ThisBlogThis!Share to TwitterShare to FacebookShare to Pinterest
Labels: sfx