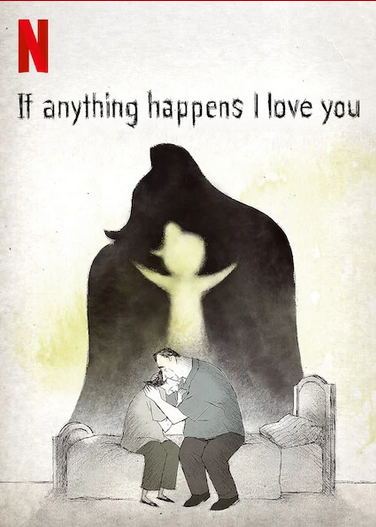 A little girl waves good-bye to her parents as she goes to school. Later that day, there is a report of an Active Shooter at the school. The parents receive a text message from their daughter:
If anything happens i love you
It is the last message they would ever receive.
This animated short film is Recommended Viewing. It runs 12 minutes long but delivers a powerful message about love and loss. At the 93rd Academy Awards, it received the Academy Award for Best Animated Short Film. It is currently streaming on NETFLIX.
▶ Here's the Trailer

Two parents begin to grow separated from one another following the death of their preteen daughter. Though they refuse to speak to one another in person, both parents are watched over by shadows expressing their true emotions. While the father goes outside, the mother thinks about entering her daughter's old bedroom, though she stops herself due to overpowering grief and sadness.

While doing laundry, the mother begins to cry after realizing she has washed her daughter's shirt. She sits near the washing machine, causing a soccer ball to fall down and open her daughter's bedroom, which also rolls onto a record player, playing the song "1950". The mother decides to enter the room, where she later reunites with her husband. While "1950" continues to play in the background, a shadow representing their daughter pops out of the record player, and the parents begin to remember events in their daughter's life.

In a series of flashbacks, the parents see their daughter grow up: developing a love for soccer, celebrating her 10th birthday, and experiencing her first kiss. In the final flashback, the daughter leaves her parents to attend school. Knowing what is about to happen, the shadows of the parents attempt to stop her from entering the premises, but, this being a memory, they fail. Inside the school, the daughter is shot and killed during a school shooting, with her final text to her parents being "If anything happens I love you".

As the shadows of the parents grow apart, the shadow of the daughter brings them together, forcing the real parents to see the good memories they were able to experience with their daughter when she was alive. In the present, the parents hug, and the daughter's shadow becomes a bright light in between the shadows of her grieving parents.
PRODUCTION:
According to writers Will McCormack and Michael Govier, who became friends at an acting school, the initial idea for the film came from a meeting between the two at Griffith Park, where Govier thought about making a film where shadows represented emotions people couldn't reach. McCormack agreed, opining it is a "powerful" premise. The goal of the film was to show "the grief that still lingers on in the community, even though maybe the news cycle has left them, and what that grief looks like." To direct the film, the pair met with several parents who had lost their children to school shootings and gun violence in the United States, aware of the sensitive subject matter. The pair also worked closely with Everytown for Gun Safety and Moms Demand Action, allowing the organizations to share their own feedback on the film's script and amplify its overall theme.

From the very beginning it was always going to be an animated film. We just thought a live-action version of this would be way too intense. We thought animation was the perfect gateway to have these deep conversations about loss and grief.

— Govier on deciding to expand the project into an animated film

To bring out their self-funded idea as an animated film, the pair first met with producer Maryann Garger. Soon after, If Anything Happens I Love You began production in late 2018, with animation taking place from April 2019 to the December of that same year. In total, twenty-eight people worked on the short film, including Youngran Nho, Haein Michelle Heo, and Julia Gomes Rodrigues, who used TVPaint Animation to animate the project. Production concluded in February 2020. To address the importance of diversity and representation in animation, the short was animated, composed, and lead-produced by an all-female crew.

The film was produced by Govier, who wrote the 12-page script for the short film with McCormack in a year. Shortly after, Nho was hired while she was attending the California Institute of the Arts to work as an animator and artistic director on the short, having been recommended by professor Maija Burnett, using the black-and-white palette from the Academy Award-winning short film Father and Daughter as inspiration. According to Nho, the film's background consisted of watercolor on paper to make the story feel "raw" and "unfinished," mentioning that the film attempted to have minimum color in its background to match the "emptiness that fills [the] grieving parents."

According to McCormack and Govier, the pair wanted to tell a story through anthropomorphic shadows, and as a result, multiple sequences were not drawn with "full technicolor" as they wanted to "illustrate and explore grief" in the short film. To keep in touch with Nho and the rest of the crew, McCormack and Govier used the software Slack to communicate, "critiquing and confirming each other's work in real-time."

Most of the film's score was composed by Lindsay Marcus, with the "Beautiful Dreamer" sequence of the film being arranged and performed by the Inner-City Youth Orchestra of LA run by Charles Dickerson. In an interview for Animation Scoop, McCormack revealed that the song "1950" was chosen for the film because the pair were listening to it while searching for music for the short. Also produced by Gary Gilbert and Gerald Chamales, the film was edited by Peter Ettinger on Adobe Premiere Pro.