Stop-motion film of "The Rifle's Spiral" 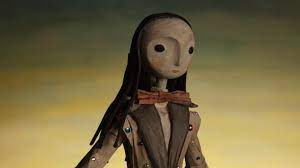 The Shins - The Rifle's Spiral
▶ Watch the Music Video
As the rabbit slowly folded into nothing, the three men stared in amazement. Their new pet rabbit had been lost. They had bought it just a short train ride ago, and, being magicians, decided to make it black because they liked the color. After a short consultation amongst themselves, they came to the conclusion that the rabbit had been taken using a short-range teleportation spell. Accordingly, they began to search for their lost rabbit. As they searched, they became more and more infuriated about their rabbit being stolen right underneath their noses. The one-eyed man, having a telescope, had more visible range and just made out a small magic show hosted by a child. He pointed it out and they all decided to check it out. When they got to the surprisingly talented girl's show, they spotted the rabbit in a crate near the girl's feet. Obviously, they inquired as to how the girl had obtained it. She told them it was just a simple rabbit-in-a-hat trick, and that she intended to keep it. After a heated argument over the ownership of the rabbit, the men put her in a bag and cast a spell on the bag so that it would take the girl home, her being far too young to be on her own. After hauling the crate (still having the rabbit in it) quite a far distance, the crate suddenly flung itself onto the ground. What they saw next would be their worst nightmare. Their beautiful rabbit that they would cherish and love forever was morphed into a hideous beast, ready to tear them apart. Casting a counter-spell, the men waited for the rabbit to change back, but the girl had made the rabbit this way permanently. The rabbit launched a fireball at the men and they all fell, never to get back up again. As they were slowly dying, they watched the girl land and take a bow. It had all been a sadistic play, for no one to watch. It was all just to humor this girl that had stolen their beloved rabbit, and turned it into a monster. May those men rest in peace, they did what they could.
Posted by anim8trix at 12:00 AM