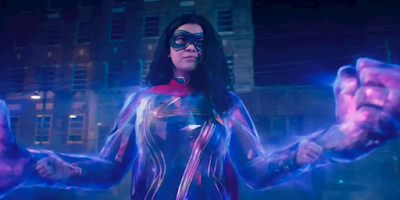 Step inside the pitch meeting that led to Ms Marvel!
Marvel has been going full throttle with their content output in Phase 4. With show after show after show hitting Disney Plus in the past year, some people are saying that superhero fatigue may finally be setting in. So putting out a new series about a character people aren’t super familiar with, starring a newcomer actress was always going to be a challenge, no matter how well-reviewed the show was.

Ms Marvel does raise some questions though. Like does every single teenager boy have a crush on Kamala? Why is this Damage Control department so bad at their jobs? Does everybody just have elaborate exposition presentations ready to go? What’s up with the sudden time travel? How long did those kids have to rig up the entire school Home Alone style?

To answer all these questions and more, step inside the Pitch Meeting that led to Ms Marvel! It’ll be super easy, barely an inconvenience.
▶ Watch the Video
Posted by anim8trix at 12:00 AM