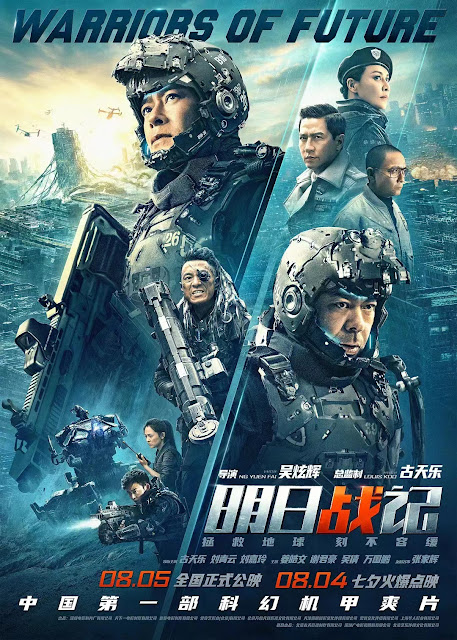 WARRIORS of the FUTURE
When a meteor carrying a destructive plant strikes the world, a suicide squad is given hours to save their post-apocalyptic city from total collapse. Starring:Louis Koo, Sean Lau, Carina Lau.
In 2055, wars have ravaged the Earth with the invention and the prevalent use of military robots, as global warming and disasters have destroyed and polluted the atmosphere entirely. Many people are born with birth defects and die, with sky nets built to protect the remnants of people in Earth. B-16 (now a futuristic Hong Kong city) is bombarded by a meteor during the construction of skynets. Pandora, an alien plant, emerges from the meteor which causes devastation to a 5 km area, and grows rapidly when there is rain. However, it can purify the air. ASU's (a local military force) lead scientist, Dr Chan, finds a way to eradicate Pandora and to purify the air.

Tyler and his friend Johnson Cheng, soldiers working for the ASU, are tasked to neutralize the threats whilst attempting to save the city. Colonel Tam is sent to oversee B-16; but she has a second plan to bomb the entirety of Pandora, which could kill a hundred and sixty thousand people in the area. Cheng heavily opposes the idea of sacrificing the citizens, as Tyler recruits old wartime friend Skunk to combat the growing threat. Privates Connor and Lincoln work with Tyler as Fighters 86, 15, and 46 as they escort the Orca 1 into the operation area. During the mission, Sean Li, the temporary leader of the government, sabotages Orca 1 as soon as the first storm comes, falling into a building which carried the gene missiles within it. 15 and 46 get sabotaged by robots and Pandora, crashing afterwards. Only Fighter 86 survives and finds the area where the pistil is, located at Central Avenue 5.

Lincoln is critically injured as Connor and Tyler try to help him and look for resources at an abandoned hospital, but Lincoln is suddenly snatched and eaten alive by mantis-like creatures. 20 more of them proceed to fight Tyler, as he retreats to a AED room. He finds a girl, Pansy, whose mother has died. Meanwhile, Connor hides in the mortuary, hoping the monsters don't find him. Cheng then drives an armoured car to the operation area, and uses a hatchet to kill most of the mantis-like creatures while Tyler pulls Connor out. Together with Skunk, they escape the hospital and arrive at the building where the Orca collapsed, finding the evidence that Li had rigged the robots and the gene bullets. The team contact Li, saying that they have the evidence of him rigging the robots. Li then proposes a challenge: to beat him, they will have to go against 3 super powerful robots.
Coming to Netflix December 2, 2022.
▶ Watch the Trailer
Posted by anim8trix at 12:00 AM