The Voice of Batman has Died at 66 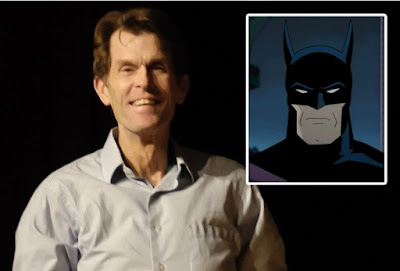 KEVIN CONROY
(November 30, 1955 – November 10, 2022)
The Iconic Voice of Batman in Animation and
Gaming has died of cancer at Age 66
Kevin Conroy was an American actor. He was best known as the voice behind the DC Comics superhero Batman in various media, beginning on the 1990s Warner Bros. television series Batman: The Animated Series as well as other TV series and feature films in the DC Animated Universe. Due to the popularity of his performance as Batman, Conroy went on to voice the character for multiple films under the DC Universe Animated Original Movies banner and the critically acclaimed Batman: Arkham and Injustice video games.
As a voice actor, Kevin Conroy is best known for his starring role as Bruce Wayne / Batman in the acclaimed Batman: The Animated Series (1992–1995). He continued to voice Batman in numerous animated spin off projects, which collectively took place in what is known as the DC Animated Universe (DCAU). These spin-offs include the TV shows The New Batman Adventures (1997–1999), Batman Beyond (1999–2001, in which he portrays an elderly Bruce Wayne retired from crimefighting), Justice League (2001–2004) and Justice League Unlimited (2004–2006) as well as the theatrical film Batman: Mask of the Phantasm (1993), and the direct-to-video films Batman & Mr. Freeze: SubZero (1998), Batman Beyond: Return of the Joker (2000) and Batman: Mystery of the Batwoman (2003). He also voiced Batman for the character's guest appearances in the DCAU's Superman: The Animated Series, Static Shock and The Zeta Project.
Conroy is distinguished for being the first voice actor to use two distinct voices to portray Bruce Wayne and Batman, which Michael Keaton had previously done in Tim Burton's live-action Batman films. In a tally of performances that include every episode and movie portrayal of Batman in live-action and animation, Conroy portrayed the character longer than any other actor. The previous record-holder was Olan Soule, who voiced Batman in various animated works between the late 1960s and early 1980s (including Super Friends). Apart from the DCAU, Conroy also portrayed Batman in the direct-to-video DC Universe Animated Original Movies: Batman: Gotham Knight (2008), Superman/Batman: Public Enemies (2009), Superman/Batman: Apocalypse (2010), Justice League: Doom (2012), Justice League: The Flashpoint Paradox (2013), Batman: Assault on Arkham (2014), Batman: The Killing Joke (2016) and Justice League vs. the Fatal Five (2019).
After the September 11, 2001 attacks in New York City, Conroy participated in relief efforts by volunteering to cook for police officers and firefighters. During an audio commentary on Batman: Gotham Knight, Conroy expressed his surprise at the reaction of the emergency service workers to his presence. At the behest of another cook, Conroy called out from the kitchen to the dining area in his "Batman voice", reciting the iconic line, "I am vengeance! I am the night! I am Batman!" (from the Batman: The Animated Series episode "Nothing to Fear"). This was greeted by cheers and applause from emergency service personnel, many of whom had been fans of Batman: The Animated Series during its airing in the 1990s. Conroy confessed to being humbled and deeply flattered by the reaction.
In preparation for the theatrical release of the 2012 live-action film The Dark Knight Rises, Conroy re-dubbed Christian Bale's Batman lines for an animated version of one of the film's trailers.
Conroy stated at the 2013 Dallas Comic Con that he had been working on "the next Arkham", leading to rampant speculation that he would reprise his role as Batman in Batman: Arkham Origins. In June 2013, however, it was confirmed that Conroy would not be involved in Arkham Origins, meaning Conroy may have been referring to an yet-unannounced game from the Rocksteady Arkham series. On March 4, 2014, a new Arkham game titled Batman: Arkham Knight was announced with Conroy reprising his role.
He confirmed on Twitter in October 2013 that he had filmed a role on Tim Daly's web series The Daly Show, where Conroy parodied his role as Batman in a fight with Daly parodying Superman (whom Daly previously voiced in Superman: The Animated Series).
Conroy portrayed Bruce Wayne of Earth-99 in live-action in the Batwoman episode of Arrowverse crossover "Crisis on Infinite Earths".
Mark Hamill, Conroy's frequent voice actor co-star as the Joker, spoke highly of working with Conroy. Regarding his willingness to be involved in a Batman-related project, Hamill says, "When they offer me roles now, I say, 'Is Kevin doing it?' ... I don't even have to read the script, if Kevin's doing it I'll do it."
Posted by anim8trix at 12:00 AM