The voice of the Count dies 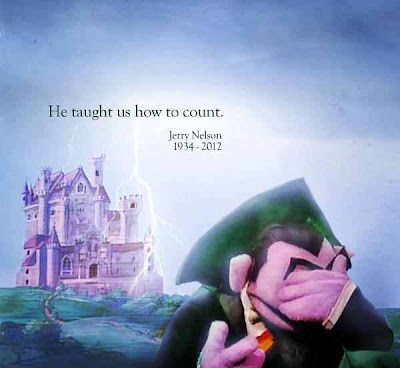 LOS ANGELES — Jerry Nelson, the puppeteer behind a delightful menagerie of characters including Count von Count on "Sesame Street" and Gobo Fraggle on "Fraggle Rock," has died. He was 78. Nelson, who suffered from emphysema, died Thursday night in his Massachusetts home on Cape Cod, the Sesame Workshop said Friday. "Every description of his characters describes Jerry as well," said "Sesame Street" executive producer Carol-Lynn Parente. "Silly, funny, vulnerable, passionate and musical, for sure. That voice of his was superb." Although he'd been in declining health for some time "his attitude was never bad," Parente said Friday. "He was always so grateful for what he had in his life." "We're having a rough day on the Street," she said. In a tribute posted online by the nonprofit Sesame Workshop, Nelson was lauded for his artistry and the "laughter he brought to children worldwide" with the Count and other Muppet puppets including Sherlock Hemlock, Herry Monster and the Amazing Mumford. Nelson was part of other projects featuring Jim Henson's Muppets, including the 1984 movie "The Muppets Take Manhattan" and TV series including the 1980s "Fraggle Rock" and 1990s "Muppets Tonight." In recent years, Nelson gave up the physically demanding job of operating the Count and other puppets on "Sesame Street" but still voiced the characters, the workshop said. The show's new season launches in September and Nelson's voice will be heard. In 2010, he released the album "Truro Daydreams," the title that referred to the Massachusetts town. Survivors include Nelson's wife, Jan, Parente said. Funeral plans were not immediately available.
Posted by anim8trix at 12:05 AM