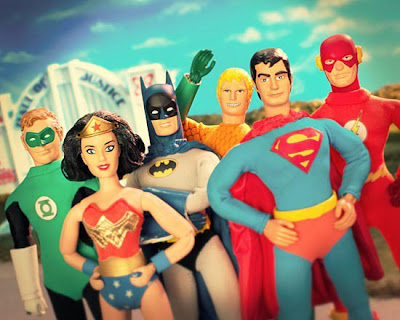 This fall, the guys at Robot Chicken are set to give the same treatment to DC Comics that they gave to Star Wars: a full-on stop-motion special full of raunchy gags and parodies. Now the trailer for the special originally released at this year's San Diego Comic-Con has hit the net, and it doesn't disappoint.

Just as they sought George Lucas' approval for the Star Wars specials, Robot Chicken secured the cooperation of both Warner Bros. and DC Comics for this particular sci-fi parody adventure, and they even got DC's chief creative officer (and Justice League, Green Lantern and Aquaman writer) to help out.

They also packed some serious star power into the special, with a cast that features Neil Patrick Harris as Two-Face, Alfred Molina as Lex Luthor, Nathan Fillion as Green Lantern and Megan Fox as Lois Lane, along with Robot Chicken regulars Seth Green, Matt Senreich, Clare Grant, Breckin Meyer and more.
Posted by anim8trix at 12:06 AM