"It's very sad to see that it's possibly because of some stereotyping about geeks and the type of things that we do," Trota said.

Chi-Fi Con 2014 was supposed to be held in Chicago in March. But convention organizers canceled event after they said the Westin Hotel staff referred to the attendants as "freaks."

Between 2,000 and 3,000 science fiction and fantasy fans were expected to attend the convention at the Westin Chicago River North.

But according to Chi-Fi Con's website, Chi-Fi Founder and Chairman James Dobbs was worried about whether the hotel would be able to provide a welcoming and accepting atmosphere for the event after a senior Westin staff member referred to the guests as "freaks." Dobbs also said hotel staff "expressed their disapproval of our anti-harassment policy."

Trota has attended a number of conventions that feature fans who sometimes dress up as their favorite characters. 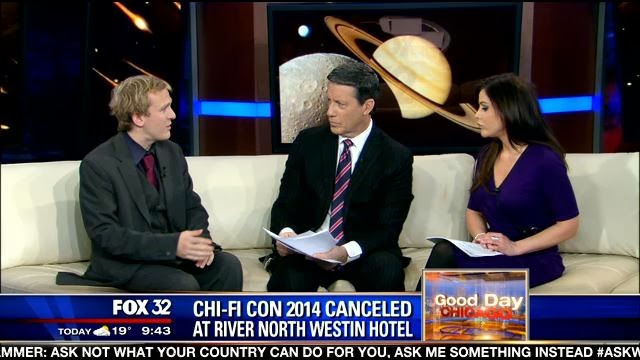 Chi-Fi Con organizers have been busy trying to salvage their plans by looking at other hotels, they feel will be more accommodating to all geeks alike wanting to meet some of their favorite celebrities.

"I'm sure they're very sad, I'm very sad. I feel really bad, like we've sort of let them down, but that's why we're planning such a fantastic event and why we're planning such a good 2015 is to try to do what we can to make that right," the founder of Chi-Fi Con, James Dobbs, said.
Dobbs joined Good Day Chicago Wednesday morning to give background to the situation and explain why Chi-Fi Con and the Westin decided to part ways by mutual decision.

He made very clear that the actions made by the River North Westin staff did not change Chi-Fi Con's attitude toward the Westin brand or Starwood Hotels, with whom they frequently organize other conventions.

The plan is to still plan an event for March 29th some place in Chicago, featuring guests and musical acts from around the world.

Now, organizers are looking to assistance for their hotel selection.

"We've retained a professional event management company whose going to be our hotel liaison and going to manage all of that. Because we kind of learned our lesson about the complexities of hotel negotiations," Dobbs said.

When FOX 32 News reached out to Westin Hotels, the company made this statement:
"Our team worked diligently to accommodate this group booking, and we never objected to the organization, its attendees or the anti-harassment policy. After much discussion, Chi-Fi Con asked to be allowed out of their contract when it became clear that mutual needs could not be met, and we agreed."

The event will be moved to another location and held in the spring of 2015. Full refunds are available to ticket holders.

On Saturday, March 29, 2014, Chi-Fi Con plans to host an event with various music guests and parties in downtown Chicago, so that those who planned to attend Chi-Fi Con 2014 will still have a fabulous time in March. All pre-registered guests will have free admission. Details will be released as they are confirmed.

To keep up-to-date with Chi-Fi Con, visit their website.
Posted by anim8trix at 12:00 AM