If you are one of the lucky residents of the town of Sakura in Japan this month, then you don’t need to be told what to get excited about, but for those not currently residing under a Japanese rock, Sakura has been awarded 3000 limited edition motorcycle license plates bearing the image of anime superstar Lupin the Third. The plates are being issued to honor Lupin creator Monkey Punch, a resident of Sakura, and there will be four colored versions, three for motorcycles and one for microcars.

Both residents and non-residents of Sakura can enter an application for the Lupin plates at the city’s official site beginning on January 15, 2014. 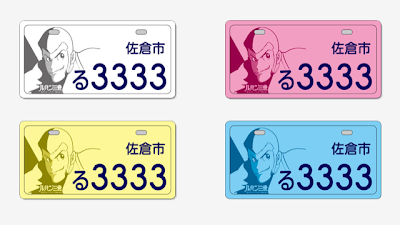