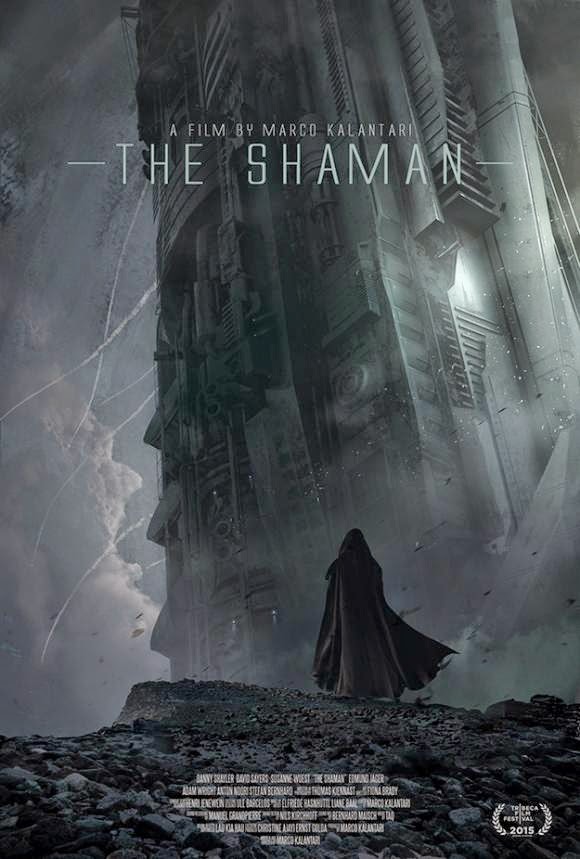 T H E   S H A M A N
[Source: blastr.com] Here's a first look at a new sci-fi short that can visually rival anything the major Hollywood studios are putting out there.

The film is called The Shaman, and it's directed by Marco Kalantari, an Austrian filmmaker who has a handful of other shorts and one feature film -- the 2005 post-apocalyptic saga Ainoa -- under his belt. I haven't been able to see that, but based on the trailer for The Shaman, Kalantari is fully capable of creating and delivering the tentpole-sized goods.

According to The Playlist, Kalantari hired an international team of artists from spots like Japan, Singapore, Taiwan, Ukraine, France, Serbia, Malaysia, the UK, Iceland and Germany to help put together The Shaman, which will premiere at the Tribeca Film Festival in mid-April.

To be sure, some of the stuff in the trailer looks a little questionable -- what's with the guy playing violin all the time? -- and I hope that the portentous tone doesn't translate into a pretentious or heavy-handed film. But in terms of sheer scope and imagery, this really connects, and I wouldn't be surprised if Mr. Kalantari starts getting calls from Los Angeles in the near future.

A synopsis, the trailer and a poster are below. What do you think? Does The Shaman look spectacular, and is Kalantari a filmmaker to watch?

The face of conflict has changed. People kill people but they now rely on giant, intelligent battle machines to fight. Meanwhile, mankind has re-discovered the arts of magic and Shamanism and the Generals on both sides use well-trained spiritual warriors to face the threat of machines. Shamans have special senses; they are experts in all aspects of the "unseen" and the "beyond". They believe that every person, animal, plant and object has a soul. When crossing the border to the Netherworld, the Shaman can find this soul and interact with it. That is what makes him such a deadly, highly effective weapon. They track and convert the souls of their enemies' giant battle machines in a psychological soul-to-soul confrontation. But Shamans are not invulnerable. They are just people and can be killed like anyone else.

Shaman Joshua Van Kern and his squire Lene embark on a mission to convert a giant battle colossus and succeed where troops have failed.