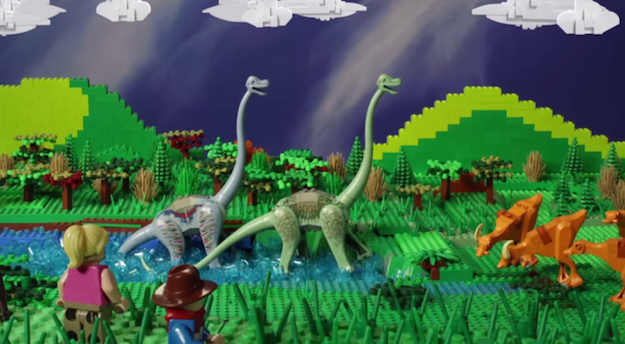 
This version, a mere three minutes long, hits all the highlights of the dinosaur adventure story—including the famed vibrating glass of water. Made by Paul Hollingsworth, a contributor to YouTube's DigitalWizardz channel, the builder explains at the end of the video, "I wanted to prove to [my daughter] Hailee we could do anything with LEGO." He certainly did.

Obviously, there's more to this production than just LEGOs; Hollingsworth leaned on some animation and greenscreen for some of the work. In fact, you can see the work for yourself. The movie even comes with a "making-of" video.

With any luck, the upcoming Jurassic World, which will be released on June 12, 2015, will be equally cool.
Posted by anim8trix at 12:00 AM