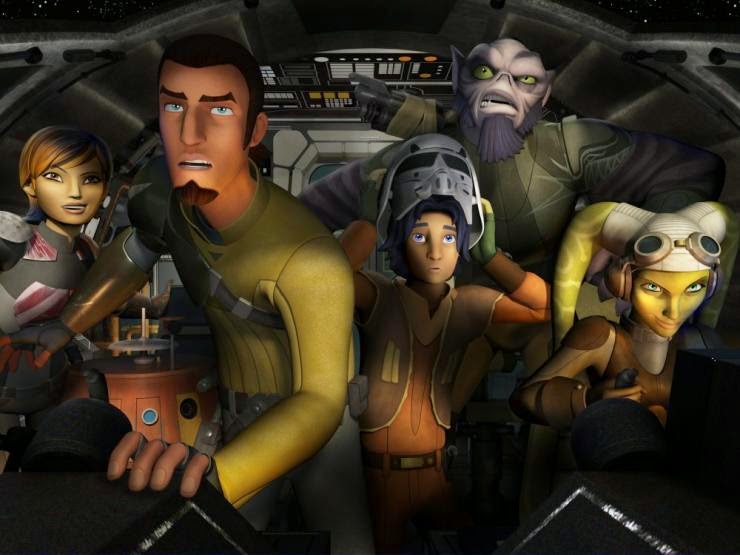 S T A R   W A R S :   R E B E L S
[Source: blastr.com] Before Star Wars Rebels kicked off last fall, the show's creators teased the arrival of a number of already-known characters from the franchise, including characters from the live-action films and elsewhere in the Star Wars universe. At the time, we didn't know who those characters would be or just how big a role they would play in the development of the Rebels cast and their story, but over the course of the first season the show definitely had more than its fair share of major Star Wars cameos. We saw Billy Dee Williams return to voice Lando Calrissian and Frank Oz return to voice Yoda. We saw Grand Moff Tarkin arrive to try to make sense of the Rebels for himself, and we saw James Earl Jones once again lend his iconic voice to the intimidating figure of Darth Vader. All of those appearances took place over the course of just 13 episodes, but even they weren't enough for Rebels' first season, and in last night's finale viewers got one more big surprise.

SPOILERS AHEAD for those of you who haven't caught up with Rebels yet.
Throughout season one, the rebels were assisted by a mysterious informant known only as "Fulcrum," and the more Fulcrum appeared, the more fans began to theorize about just who the mysterious source really is. Well, last night the show made it all clear, and it turns out a lot of fans were right: "Fulcrum" was actually Ahsoka Tano, star of the acclaimed animated series Star Wars: The Clone Wars, who hasn't been seen (apart from a vision sequence) since the fifth season of that series wrapped up in 2013.

When we last saw Ahsoka, she had just left the Jedi Temple and said goodbye to her master, Anakin Skywalker. Clone Wars supervising director Dave Filoni had at least 12 episodes' worth of new stories planned for Ahsoka at the time of the series' end, and those stories would've followed her all the way up to the "Order 66" mass extinction of the Jedi at the end of Star Wars: Revenge of the Sith. Those stories were never produced, though, and when it came time to reintroduce her in Rebels, as a much older warrior (she's now in her 30s), Rebels executive producer Greg Weisman devised the "Fulcrum" idea. For Filoni, her role in Rebels is similar to what Obi-Wan Kenobi's was in the very first Star Wars film.

"She's a person who has a lot of her own trials that she still needs to get through," Filoni said. "Obi-Wan spoke about these Clone Wars and these things that had gone by, and she can be that in an active way for Ezra and Kanan."

So, Ahsoka's back, but while we can certainly expect to see her more of her when Rebels returns for its second season later this year, Filoni and company are committed to preserving her mystery for now.

"It's not like she's going to have a bunk on the Ghost anytime soon," Filoni said. "She needs to remain kind of a mysterious figure who is woven in and out of the story."

Check out footage of Ahsoka's reveal in the clip below:
Posted by anim8trix at 12:00 AM