List of Free Comics to Choose From
[Source: IGN.com] Do you like comic books? Do you like free stuff? Do you not normally read comics, but might be convinced to walk into a shop in order to score some free stuff? Then you're in luck. This Saturday is Free Comic Book Day. As with every FCBD, publishers large and small are rolling out the free books in order to entice new readers and get fans excited about what's coming down the pipeline.
The FCBD 2015 lineup is an impressive one, whether you're looking for the major releases from Marvel and DC or just want some fun, self-contained stories with no financial commitment. We've compiled a list of 17 comics that every fan should keep an eye out for this weekend.

If you're interested in FCBD but don't know where to look for these books, be sure to check out Comic Shop Locator 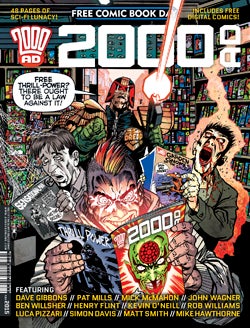 Written & Drawn by Various | Rebellion/2000 AD
2000 AD has always been the place to turn if you want darker, more sci-fi driven comics from a variety of up-and-coming British creators. This special offers a healthy sampling of 20000 AD's wares. The highlight is a new Judge Dredd story from writer Matt Smith and artist Norm Breyfogle, while other big names like Rob Williams, Kevin O'Neill and Dave Gibbons also contribute to this issue. 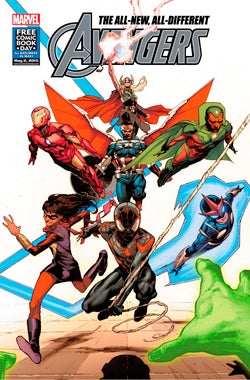 Written by Mark Waid & Drawn by Mahmud Asrar | Marvel Comics
One of two major releases from Marvel this weekend, All-New, All-Different Avengers looks to offer a glimpse of what form Earth's Mightiest Heroes will take after Secret Wars. This new team is comprised of mostly young upstarts (Ms. Marvel, Ultimate Spider-Man Miles Morales, Thor). Even if you prefer a more classic roster, the creative team on this issue makes it worth a read. 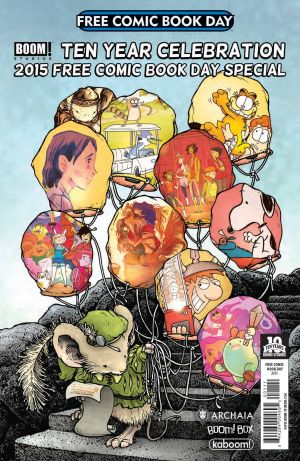 Written & Drawn by Various | BOOM! Studios
BOOM! Studios tends to go all-out when it comes to FCBD, and this year is no exception. This oversized issue crams in short stories from a number of all-ages ongoing titles, including Lumberjanes, Adventure Time, Peanuts, Mouse Guard and Garfield. As much as our Review Crew has praised Lumberjanes, this issue is worth picking up for that alone. 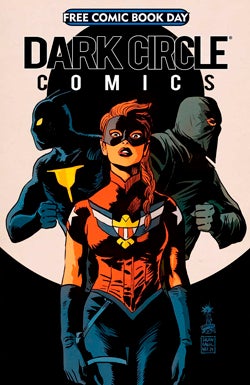 Archie Comics recently kicked off their Dark Circle label, which features the sorts of mature readers superhero stories you might expect to find at publishers like Image or Vertigo. This issue offers glimpses of The Black Hood, The Fox and The Shield 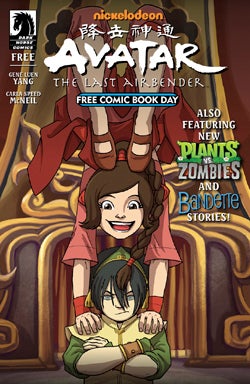 Written by Gene Luen Yang & Paul Tobin & Drawn by Various | Dark Horse Comics
Dark Horse will be offering a sampler issue of some of their all-ages comics. The big draw with this issue is a new Avatar-: The Last Airbender story from regular writer Gene Luen Yang. The book also includes a new Bandette story, which is convenient since that series just earned an Eisner nomination last week. 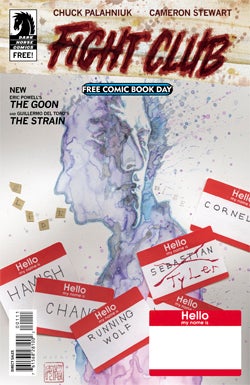 Written & Drawn by Various | Dark Horse Comics
Dark Horse will also be targeting older FCBD attendees with this anthology issue. Anyone curious about the upcoming comic book sequel to Fight Club will want to check out this preview. That story is accompanied by a new Goon tale from Eric Powel and a new The Strain story from Guillermo Del Toro himself. 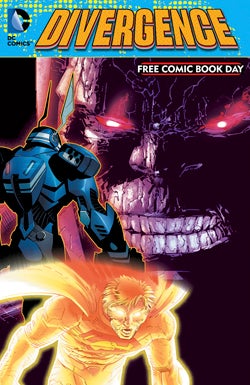 Written & Drawn by Various | DC Comics
DC's big release this FCBD is Divergence, which will shed light on the new status quo of the DC Universe in the aftermath of Convergence. The three stories in this issue will explore what's next for Superman, what hero will rise to become the new Batman in Gotham, and reveal the origins of the woman known only as "Darkseid's Daughter." 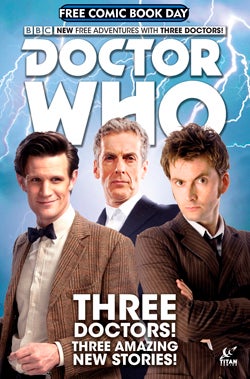 Written & Drawn by Various | IDW Publishing
Can't get enough Doctor Who? Maybe it's time to dive into the comics. This issue offers three new stories that focus on the Tenth, Eleventh and Twelfth Doctors. It also includes a preview of IDW's upcoming Doctor Who event storyline that will be playing out this summer. 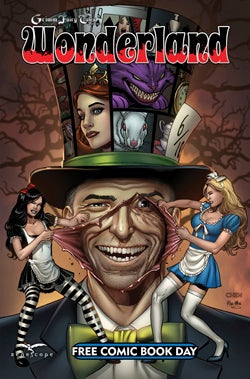 Written by Erica J. Heflin & Drawn by Tony Brescini | Zenescope Entertatinment
It's easy to write off Zenescope's Grimm Fairy Tales books because of their cheesecake-y covers, but these comics have more depth than you might expect. This issue is as good a place as any to dabble in the GFT universe. It focuses on Callie, the White Queen of Wonderland, as she deals with new and emerging threats to her realm. 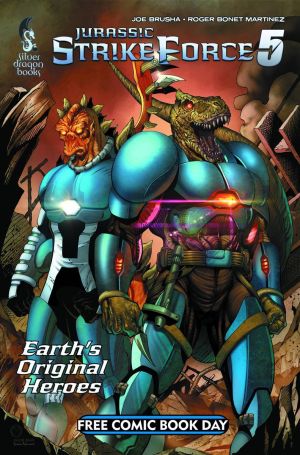 Written by Joe Brusha & Drawn by Roger Bonet | Zenescope Entertainment
Not that the current TMNT comics aren't well worth checking out, but if you prefer more anthropomorphic mutant superheroes in your comic book diet, this series is worth checking out as well. The series is geared towards an all-ages audience, and the fact that this issue is a prequel to the main series makes it an ideal jumping-on point. 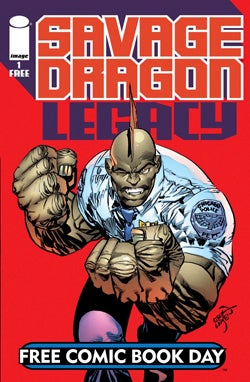 Written & Drawn by Erik Larsen | Image Comics
Savage Dragon is one of the longest-running independent comics ever. Creator Erik Larsen is using FCBD to ring in a new era for the franchise. This issue sees Malcolm Dragon graduate high school and follow in his father's footsteps by joining the Chicago PD. What challenges will this young hero face as he transitions into adulthood and deals with his father's legacy? Whatever happens, the journey begins here. 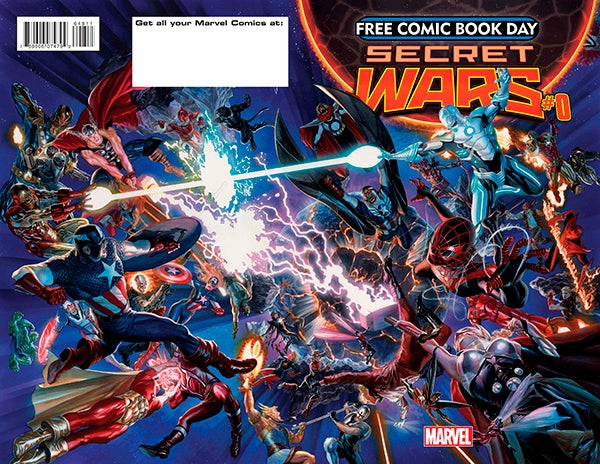 Written by Jonathan Hickman & Hajime Isayama & Drawn by Paul Renaud & Gerardo Sandoval | Marvel Comics
While Marvel is already looking ahead to what comes after Secret Wars, they're also using FCBD to help get readers primed for Secret Wars itself. Jonathan Hickman and Paul Renaud are collaborating on a prologue to the big event (which officially kicks off next Wednesday). However, the biggest selling point of this issue for some readers may be the inclusion of the 8-page Avengers/Attack on Titan manga crossover that was published in Japan. 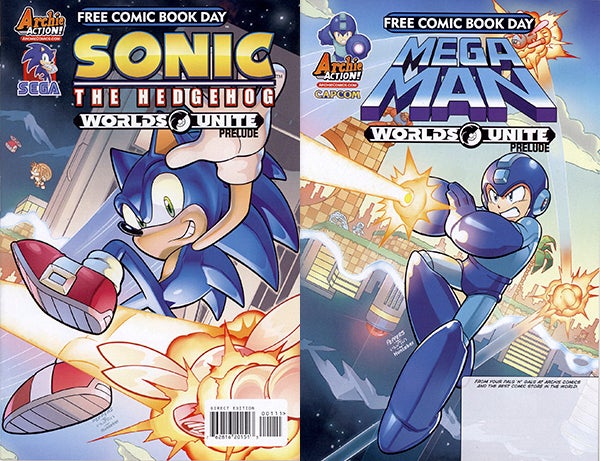 Written by Ian Flynn & Drawn by Various | Archie Comics
Archie Comics is gearing up for another big crossover between the Sonic the Hedgehog and Mega Man universe. But the big wist with Worlds Unite is that many other Sega and Capcom heroes are joining the fray. This prologue issue features two stories that focus on Sonic and Mega Man, respectively, and pave the way for the crossover in late May.
Click here for more information on Worlds Unite and a preview of the FCBD special. 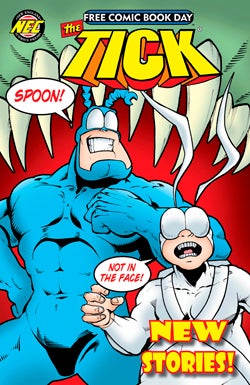 Written by Jeff McClelland & Drawn by Duane Redhead | New England Comics
Who doesn't love The Tick? Especially when he's free? This issue offers a new tale where The Tick and Arthur's apartment is haunted by the ghost of Tick's original sidekick. How will our bumbling heroes rid themselves of this pest? 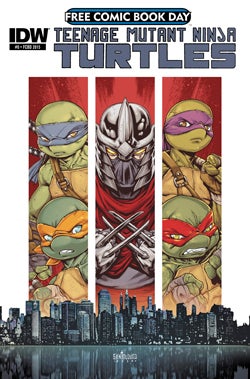 Written by Tom Waltz & Bobby Curnow & Drawn by Mateus Santolouco | IDW Publishing
IDW's TMNT series has been firing on all cylinders lately, and has even been making some surprising changes to the core lineup in recent issues. With the series building towards a massive (and possibly final) conflict between the Turtles and Shredder, this issue takes a step back and explores how each of our heroes feel about the war to come. And with Mateus Santolouco drawing, it barely even matters what the story is about. 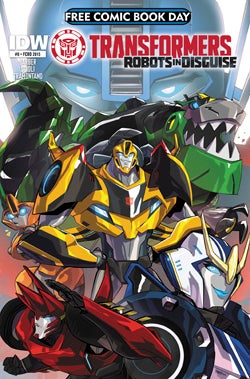 Written by John Barber & Tom Scioli & Drawn by Priscilla Tramontano & Tom Sciloi | IDW Publishing
The newest Transformers animated series just recently debuted this spring, and IDW is debuting a new tie-in comic set within this animated universe. Robots in Disguise takes place in a world where Optimus prime is missing and Bumblebee leads the Autobots to hunt down their Decepticon enemies. This issue also includes previews of IDW other upcoming Transformers projects and even a new Transformers vs. G.I. Joe strip. 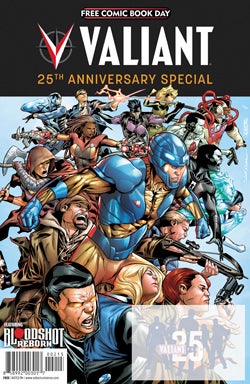 Written by Jeff Lemire & Robert Venditti & Drawn by Butch Guice & Rafa Sandoval | Valiant Entertainment
Valiant is celebrating a big 25th anniversary this year, and this FCBD issue is where the festivities begin. This special includes two new tales from some of the publisher's top creators. First, Jeff Lemire and Butch Guice team for a story that bridges the gap between the recent mini-series The Valiant and the Bloodshot Reborn relaunch. Then Robert Venditti and Rafa Sandoval offer a new tale focused on X-O Manowar. With all the attention Valiant is attracting thanks to their recent movie announcements, now is a great time to be diving into this universe.
Posted by anim8trix at 12:00 AM