Sarah Michelle Gellar Revealed as
the Seventh Sister in “Star Wars Rebels”
Lucasfilm and Disney XD have revealed the role that Sarah Michelle Gellar will play on season 2 of Star Wars Rebels. Ms. Gellar will be the cunning and crafty Seventh Sister Inquisitor, described as “a master of deception,” and “tasked by Darth Vader to track down the rebels and capture any surviving Jedi. She’s conniving, manipulative, and deadly with a lightsaber.” A video featurette has been released where she speaks about the role over clips of her character in action. 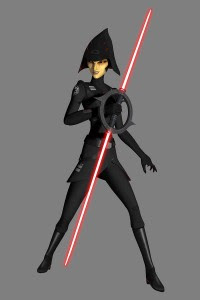