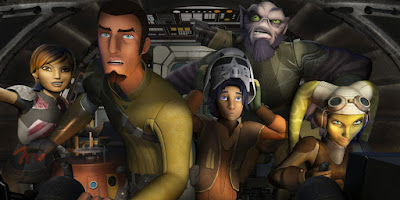 S T A R   W A R S :   R E B E L S
Season Premiere!
(Disney XD) Wednesday, 9:30 PM - "The Lost Commanders"
At least until The Force Awakens arrives, Rebels is our clearest connection to the Star Wars universe of the future, and it will hopefully reaffirm that this week with the official Season 2 premiere, in which the Rebels will embark on increasingly dangerous missions. Over the course of Season 1, the show provided a powerful contrast between the old and the new, often blending them together in seamless ways, and this season the show will go even deeper, with no less a villain than Darth Vader on the heroes' trail.
Posted by anim8trix at 12:00 AM