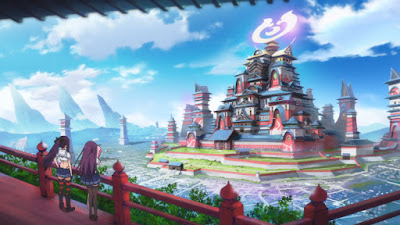 Each of the series revolves around girls who have been infected with a mysterious virus known as the A Virus (Armed Virus). These girls are divided into two classes; Externes (エクスター Ekusutā?), who can transform into weapons when sexually aroused, and Libérateurs (リブレイター Ribureitā?), who have the power to wield the Externe' weapon forms, known as Liberator Arms. These girls are brought to separate islands, which each of the series is named after. Mermaid follows an Externe named Mamori Tokonome who forms a partnership with the Liberator Mirei Shikishima. Bhikkuni follows two sisters, Rinka and Ranka Kagurazaka, who are infected with a variation of the A Virus known as the V Virus.
Posted by anim8trix at 12:00 AM