Saturday, October 24, 2015
Wood Dale Public Library
We know what you're looking for...

"It's right here at this weekend's meeting..." 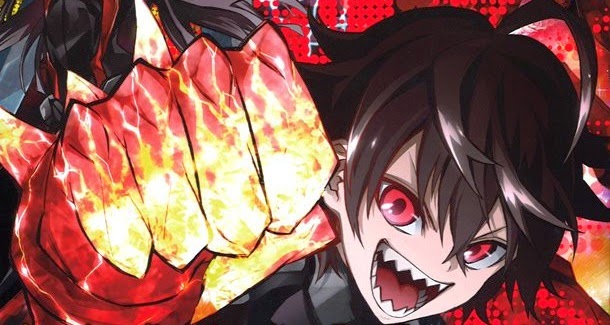 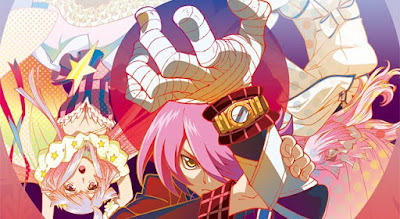 Concrete Revolutio
Plot Summary: [Source: Wikipedia] In the year Apotheosis 41, Earth is currently home to superhumans and paranormal phenomena of all kinds, from aliens and magical girls to ghosts and transforming robots. However, official knowledge of these beings is officially kept under wraps by the governments of the world. The Japanese government has quietly set up the "Super Population Research Laboratory," or the "Superhuman Bureau," to keep track of all superhuman beings in the country and eliminate them if they pose a threat to humanity. In the present, Bureau member Jiro Hitoyoshi finds himself recruiting new superhumans for the Bureau in the course of his job. However, five years later in Apotheosis 46, Jiro turns into a vigilante on the run from the Bureau while the rest of its members deal with the consequences of their earlier actions. 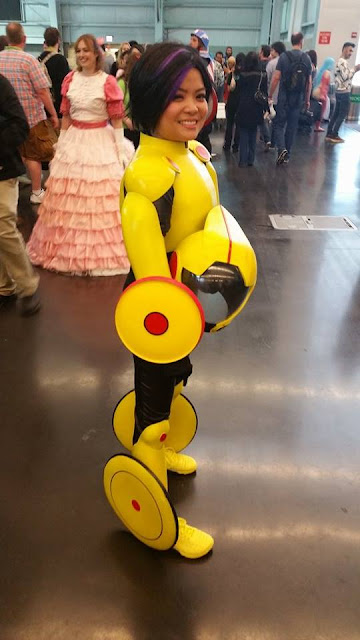 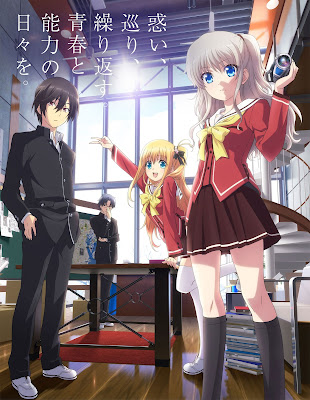 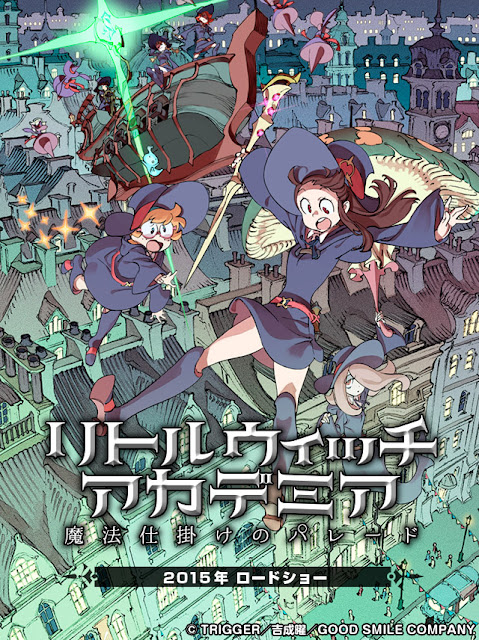 Little Witch Academia: The Enchanted Parade
Plot Summary: [Source: Wikipedia] In Enchanted Parade, Akko, Lotte and Sucy, having gotten in trouble yet again, are forced to team up with three other troublemakers; Amanda O'Neill, Constance Braunschweig Albrechtsburger and Jasmineka Antonenko, and must make an annual witch parade a success or else face expulsion. Not content with how the festival revolves around the mockery and subjugation of witches, Akko becomes determined to make the festival a spectacle that'll show off how awesome modern witches are. As Akko's ambitions for the parade grow, however, she ends up arguing with her friends when they don't feel the same way. However, Akko remains determined to prove Shiny Chariot's ideals of magic to everyone, using the Shiny Rod to borrow some magic from the Sorcerer's Stone for the parade. During the parade, some delinquent kids try to steal the rod, only to be caught by a giant that was sealed away long ago. Luckily, Akko is assisted by the other witches, including the return of Lotte and Sucy. Making up with each other, the three witches combine their power and put a stop to the giant, resulting in the parade becoming a great success. 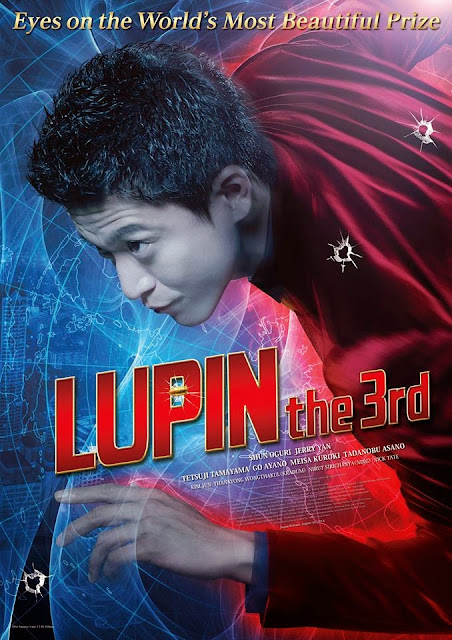 Lupin the Third (Live-Action Movie)
Plot Summary: [Source: Wikipedia] Arsène Lupin III, grandson of the legendary gentleman thief Arsène Lupin, is a member of the Hong Kong-based thieving ring known as The Works, which specializes in stealing valuable objects from wealthy owners. Lupin beats his fellow Works members Fujiko Mine (his would-be lover), Pierre (a computer genius) and Jiro to the theft of a valuable medal in Singapore, but is forced to surrender it to his rival, Michael Lee, when he threatens to kill him and Fujiko. At a meeting of The Works, Fujiko is hailed as the culprit behind the theft (thanks to Michael's machinations), and Thomas Dawson, the leader of the organization, shows them the most valuable item in The Works' possession - the Crimson Heart of Cleopatra, a necklace commissioned by Mark Antony to symbolize his love for the Queen of the Nile. However, a ruby of Cleopatra's intended to complete the necklace has not yet been recovered. A trio of thugs led by Michael - Royal, Saber and Maria - steal the necklace and kill Jiro and Dawson, apparently in revenge for 'Edward Lam', resulting in the dissolution of The Works. Lupin, Fujiko, Pierre and Daisuke Jigen join forces to find Michael and the necklace.

Over the course of a year, Lupin and Jigen establish themselves as accomplished thieves, but Jigen grows weary of following Fujiko's false leads. While meeting with her, Lupin is turned in to the police in Thailand. He then meets Inspector Koichi Zenigata of ICPO, who informs him that Michael, using the alias 'Georgio Zhang', is arranging a major buy/sell transaction with Mamrachiao Pramuk, the chairman of Navarone Security (and underworld kingpin). Zenigata wants Lupin to 'steal' the items that they intend to sell to each other for the police so that he can arrest them; in exchange, Lupin's criminal record will be erased. Lupin accepts, and enlists Goemon Ishikawa XIII into the gang.

Fujiko arranges a meeting with Michael, who explains that Edward Lam was a member of The Works and a father to them both, but after helping Dawson find the Crimson Heart and the accompanying ruby in Egypt, Dawson betrayed and killed him, and Pramuk then stole the ruby. Michael intends to buy the ruby to complete the necklace. Lupin, who has been spying on the pair, tells Michael that no matter who wins the buy/sell, he will steal the necklace.

At the buy/sell, Michael and Pramuk prepare to sell each other the necklace and the ruby respectively. During the transaction, Pramuk tells Michael that he was a former member of The Works, and killed Lam while trying to kill Dawson. Michael attempts to kill himself and Pramuk before the latter can buy the necklace, but Pramuk reveals that Royal, who (along with Saber and Maria) now works for him, disarmed the explosives. Pramuk leaves the buy/sell with both the ruby and the necklace, while Michael walks away with $200 million. Lupin, having listened to Michael and Pramuk's exchange via lip reading technology, calls off the theft, much to Zenigata's frustration.

Disheartened, Michael offers to join Lupin's gang to steal back the Crimson Heart and ruby from the Ark, Pramuk's stronghold, and is accepted. Lupin and Michael enter the Ark disguised as Zengiata and Commander Narong of the Thailand Police, and upload a virus into the Ark's networks in the guise of a calling card from Lupin. Jigen, Goemon and Fujiko attack the Ark's main defenses, killing Royal, Saber and Maria in the process, while Lupin and Michael, aided by Pierre and Joseph (another hacker), along with prior research made by Goemon, penetrate the security defenses protecting the Crimson Heart. Pramuk traps the pair in the vault, intending to suffocate them. Michael places Lupin in the vault's safe and blows the vault door up, killing himself but saving Lupin. Lupin and the others are handed over by Pramuk to Zenigata and Narong, but they instead arrest Pramuk for his crimes, using the Crimson Heart as evidence. Zenigata then discovers too late that the necklace and ruby given to him by Lupin were fakes.

Later, Lupin deduces that Fujiko was not Michael's real sister, but had pretended to be to give him a reason to live, and he offers her to wear the Crimson Heart (now complete with the ruby) to seal their relationship. However, as Zenigata returns to pursue them, Fujiko escapes on her own with the necklace, Goemon goes his own way, and Lupin and Jigen escape together in their Fiat 500.