The new redesign of the Power Rangers 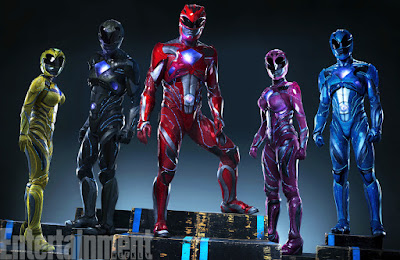 P O W E R   R A N G E R S
[Source: blastr.com] The studio has released the first official shot of the new costumes, showcasing the “translucent extraterrestrial armor that crystallizes around their bodies,” as opposed to the usual spandex and plastic from the original series. It’s certainly a bold design choice, though they do make a point to keep some homages to the original designs. The helmets are somewhat similar to the classic suits, and hey, they did keep the colors.

“The show was about kids coming of age, about metamorphosis,” director Dean Israelite (Project Almanac) told Entertainment Weekly. “These suits needed to feel like they were catalyzed by these kids and their energy, their spirit.”