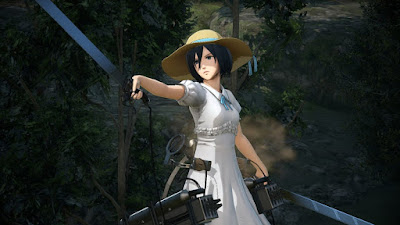 'Attack On Titan' Game
Shows Off Its Pre-Order Bonuses
With the Western release of Attack on Titan: Wings of Freedom looming, Koei Tecmo has been keen to show off the game’s pre-order bonuses.

While some of these were in the Japanese release, others are new. For instance, the cleaning costumes for Eren and Levi are included like in the Japanese version but also Mikasa’s festival costume as well (pictured above).

In the US, these will be bundled with the game at pretty much every retailer but in Europe the two costume sets will be split between outlets, with GAME getting the cleaning costumes and mostly everyone else getting the festival costume.

European fans shouldn’t feel put out though, as they’ll be getting a collector’s edition boxset containing all manner of trinkets. Along with a copy of the game, the boxset will include an art book, a muffler towel, six pin badges, the game’s soundtrack and a download code for an alternative special costume for Armin.

Currently this boxset looks to be exclusive to the European release of the game and there are no plans yet to make it available in the US.

The game itself is good though, as I played through and greatly enjoyed the Japanese version on PS4.


Developed by Omega Force, it’s a big departure from their Dynasty Warriors games but they nailed the core mechanics here. This was something many were concerned about, as getting the controls and mechanics for the Three Dimensional Maneuver Gear correct has been something of an obstacle for previous Attack on Titan games.

While the Japanese version of the game was available on PS4, PS3 and Vita, the Western release will be also coming to PC and the Xbox One.

Attack on Titan: Wings of Freedom is released in Europe on August 26th and in the US on August 30th.
Posted by anim8trix at 12:00 AM