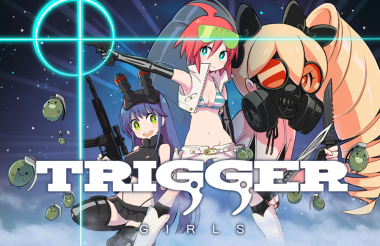 S T U D I O   T R I G G E R
Had a great time at Anime Midwest this year which was held July 8-10, 2016, at the Rosemont Convention Center. Studio Trigger was their Japanese Guest of Honor, and the highlight of my weekend. On Saturday afternoon, the autograph line for Studio Trigger was long and the staff capped the line to about 100 people. I was near the end. Progress was slow. The convention floor would be closing soon and there were still 30 people left in line. We were worried they would have to send us away before we could get an autograph. Fifteen minutes before closing, the staff announced that they would keep the line open in order to finish everyone that had been waiting all this time. That was a sigh of relief.

It looked like we were finally going to get that autograph. Then... the fire alarm went off. What the heck!? I thought this sort of s#!% only happened at Anime Central! I'm this close to Studio Trigger and the alarm goes off. Hell, let the place burn, I ain't moving without that autograph! I noticed that everyone else in line had the same idea. Nobody moved as the alarm continued to scream for about five minutes. Security guards were moving towards us. They were going to throw us out. I could feel it in my bones. Then... the alarm stopped. And so did the security guards. Whew! I've had enough drama for the day. I want my autograph!
There were three artists from Studio Trigger that were attending Anime Midwest. All of them were also doing sketches as well as autographs. And after signing for nearly two and half hours, I thought they would be dead tired, but no, they were enthused that so many of their fans were willing to endure just to meet them.  They even did more elaborate sketches as presents to those who weathered the long wait in line. And fortunately for me, I got one in color.^^

Shigeto Koyama asked me what my favorite food was, and I couldn't think fast enough, so I blurted out the one item that Anime Midwest is famous for serving in their con suite: "ramen." And so he drew this:
I felt sorry for the poor guy that stood in line behind me. He only brought one item to be signed, and he was desperately looking for something else for them to autograph, and so he reached into his wallet and produced this for Shigeto to sign: 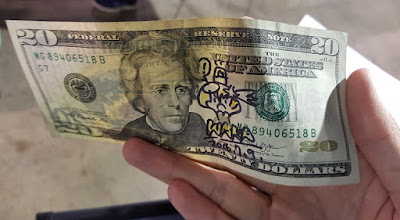 That was the last of his money which he had hoped to have used to buy some food, but looks like he'll go hungry for a while. But was it worth it? His smile spoke volumes. Yeah, it was worth it. I told him not to accidentally spend it or misplace it, which he said, that twenty bucks was never going to leave his hands. He then promptly dropped it, and it blew across the floor. He dived after it. Snatching it up, and quickly slipped it into his wallet. "That never happened," he said. 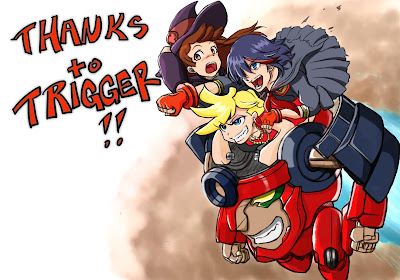