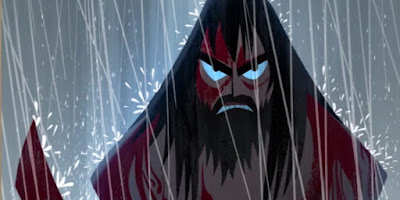 SAMURAI JACK SEASON FIVE
A behind-the-scenes video for the upcoming fifth season of Samurai Jack was unveiled at the Toonami panel during this past weekend’s Anime Expo, where production members, including Jack's voice Phil LaMarr, revealed some intriguing new info concerning our time-traveling samurai's return to the small screen.

In the video, Samurai Jack creator and director Genndy Tartakovsky explains that the new season will pick up years after the original series ended, and that there’s no direct connection between the last episode of the series and this new season. If you've been wanting to try the awesome cartoon series but didn't want to watch the previous 52 episodes, you’re in luck. Tartakovsky also says the interim years have changed Jack.

“I think we're going to see [Jack] in a new light, because we're going to see him from a different standpoint. In the original series, he was very heroic person on a very rigid quest. Now, we pick up with him and it's many years after the fact and he's a little bit lost. So, it's a story of redemption and him trying to find who he is, again.”

“People watch [Samurai Jack] with their kids. You know, through the generations. I didn't want to go full on heads getting chopped off and blood spurting everywhere, but at the same time I also wanted it to be newer and exciting and take advantage of some of those things. The way Jack’s gonna be different, he’s definitely the same, there’s definitely more darkness to it. It’s one story, one episodic story. The action is just as badass as it's always going to be. Probably even more.”