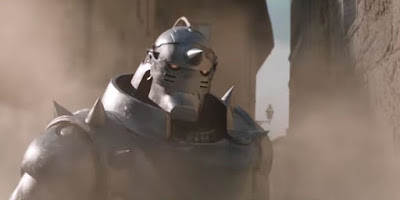 [Source: blastr] To fulfill your yearning for more live-action adaptations of classic Japanese anime after you've experienced Paramount's Ghost in the Shell, here's a fresh pair of teasers for the big screen debut of Warner Bros.' Fullmetal Alchemist. It's adapted from the celebrated series of Fullmetal Alchemist anime, manga, clothing, video games, toys and collectibles that is a dash of Harry Potter matched with a Euro-samurai flair.

Director Fumihiko Sori (Ping Pong) is committed to infusing this magical adventure with respect to the original manga source material, combining the authenticity of an all-Japanese cast with the historical background of Europe. First created by Hiromu Arakawa in 2001, the award-winning comic series has sold over 65 million volumes worldwide and is considered one of the most popular anime properties of all time.

For the uninitiated, here's the official synopsis:
The plot takes place at the beginning of the 20th century, in a reality where alchemy (ancient esoteric science that sought the transmutation of matter) is real,extremely developed and respected. The plot features brothers Edward and Alphonse Elric who, after attempting the forbidden technique of human transmutation, suffer the consequences. Alphonse loses his entire body while Edward loses his left leg. He then sacrifices his right arm to keep his brother's soul trapped within a metal suit of armor. Using mechanical prosthetics known as "automail",he‘s given the nickname "Fullmetal Alchemist", all while in search for the legendary philosopher's stone that will repair their bodies.


Fullmetal Alchemist stomps into theaters in Japan on December 1, 2017, with hopefully a US release in 2018.
Posted by anim8trix at 12:00 AM