Stan Lee in ‘The Reflection’


Studio DEEN describes the story:
“After THE REFLECTION, some of the people in all parts of the world are discovered with super powers. Some become heroes, and others villains. How did the Reflection happen? What was the cause of it? With many unsolved mysteries, the world is lead into turmoil.” 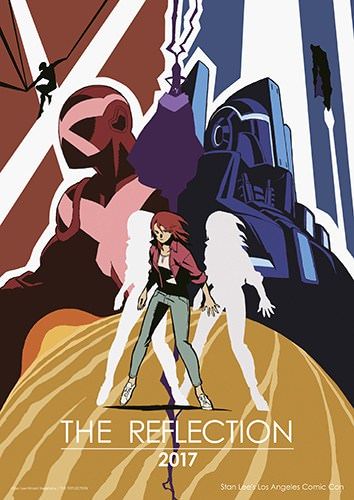 This isn’t Stan Lee’s first venture into anime. The Godfather of comic book heroes has collaborated with anime studio BONES on the Heroman anime series. And while Heroman received positive reviews for its lighthearted fighting scenes, it did not add anything new or unique to the Shounen genre. However, Lee’s work not only spread to anime but also manga as he and Hiroyuki Takei collaborated on the manga series, which ended in October 2015.

While the panel did not reveal much, we do know that it will get a worldwide release sometime next year. Last year the plan was to release it first in Japan, so luckily, that changed. In the meantime, you can watch Heroman and see if Stan Lee’s magic translates well into anime territory.
Posted by anim8trix at 12:00 AM