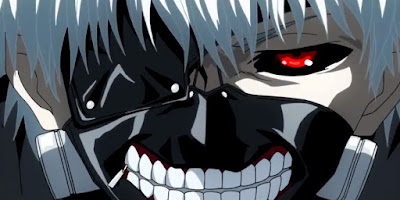 T O K Y O   G H O U L
[Source: blastr] Check out our first peek at the new live-action version of the celebrated Japanese manga series, Tokyo Ghoul. While this short look only offers a few flashes of the maniacal masks worn by the roving ghouls, it gives fans a great taste of what to expect when this dark fantasy feature strikes on July 29.

Adapted from the serialized comics by Sui Ishida, Tokyo Ghoul depicts the ravenous lifestyles of flesh-eating beings existing beneath the glass towers and spires of the Japanese metropolis. Since 2011, Tokyo Ghouls and its sequel,Tokyo Ghouls: re, have combined to sell over 22 million copies worldwide and the property has spawned a pair of anime series, video games, light novels, smartphone apps and even a stage play.

Here's the official description of the series from North American publisher, Viz:

Ghouls live among us,​ the same as normal people in every way - except their craving for human flesh.​ Shy Ken Kaneki is thrilled to go on a date with the beautiful Rize.​ But it turns out that she's only interested in his body - eating it,​ that is.​ When a morally questionable rescue transforms him into the first half-human half-Ghoul hybrid,​ Ken is drawn into the dark and violent world of Ghouls,​ which exists alongside our own.​

Bite into this fresh teaser for director Kentarō Hagiwara's Tokyo Ghoul and tell us if you've got an appetite for this feature project.