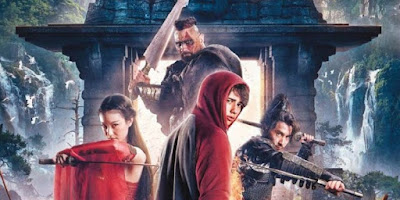 ENTER THE WARRIORS GATE
[Source: blastr] While we wait with bated breath for Luc Besson’s new space opera opus Valerian and the City of a Thousand Planets to swoosh into movie theaters in July, a fantasy-adventure film Besson co-wrote with Robert Mark Kamen (Taken, the Transporter movie franchises) titled Enter the Warriors Gate will arrive next month.

First released in China late last year, Warriors Gate will premiere in U.S. movie theaters and On Demand on May 5. Directed by Matthias Hoene (Cockneys vs Zombies), the movie stars Guardians of the Galaxy’s Dave Bautista, Uriah Shelton, Mark Chao, Ni Ni, Francis Ng and Sienna Guillory. So, what’s the movie about? Here’s a synopsis:

Epic fantasy-adventure meets martial arts action in this thrilling film written by Luc Besson & Robert Mark Kamen. After a mysterious chest opens a gateway through time, teen gamer Jack (Uriah Shelton) is transported to an ancient empire terrorized by a cruel barbarian king (former WWE superstar Dave Bautista). Jack will need all of his gaming skills as he battles to defeat the barbarian, protect a beautiful princess, and somehow find his way back home.

Yeah, it’s pretty similar to 2008’s The Forbidden Kingdom, which starred Jet Li and Jackie Chan, albeit with a video game twist. The film followed an American teenager who is a massive fan of kung fu and Hong Kong cinema and travels back in time to China after discovering a magical stick weapon. There he joins a group of martial arts warriors to free the Monkey King from imprisonment.