Joan Lee passes away at age 93 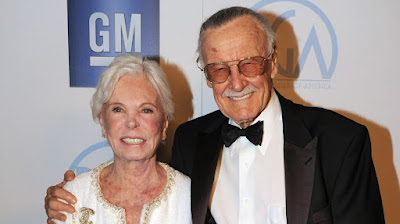 JOAN LEE
(March 1922 – July 6, 2017)
Stan Lee's wife of nearly seven decades
dies at age 93
[Source: Syfy] Our thoughts are with Stan Lee and his family right now, as Joan, his wife of 69 years, passed away this morning in Los Angeles.
According to The Hollywood Reporter, after suffering a stroke and being hospitalized earlier this week, Joan passed "quietly and surrounded by her family." She was 93, and survived by Stan and their daughter J.C. (Joan Celia).

Born Joan Clayton Boocock in England, she would go on to become a hat model. She impulsively married an American soldier during World War II, and moved to New York, only to find out the man and the city weren't exactly to her liking.

It was at that time that a friend wanted to set up Stan with a model named Betty. But instead of Betty, apparently the girl of Stan's dreams, answered the door:

"When I was young, there was one girl I drew; one body and face and hair. It was my idea of what a girl should be. The perfect woman. And when I got out of the Army, somebody, a cousin of mine, knew a model, a hat model at a place called Laden Hats. He said, 'Stan, there's this really pretty girl named Betty. I think you’d like her. She might like you. Why don’t you go over and ask her to lunch.' Blah, blah, blah. So I went up to this place. Betty didn’t answer the door. But Joan answered, and she was the head model. I took one look at her — and she was the girl I had been drawing all my life. And then I heard the English accent. And I’m a nut for English accents! She said, 'May I help you?' And I took a look at her, and I think I said something crazy like, 'I love you.' I don’t remember exactly. But anyway, I took her to lunch. I never met Betty, the other girl. I think I proposed to [Joan] at lunch.”

Stan's love eventually won Joan over, and the couple moved to Nevada for the requisite amount of time necessary to arrange for a divorce (it was apparently the easiest way to get one back in the day). After it was finalized, Stan and Joan were married an hour later.

Good thing too, A) because they obviously loved each other very much. And B) because if you think about it, without Joan, we may never have been gifted some of our most beloved Marvel tales. As the legend goes, when would-be novelist Stan worked at Marvel's precursor, Timeley/Atlas Comics, he became increasingly frustrated with the medium, particularly its lack of flawed characters. So much so, that he contemplated quitting.

But as Stan told THR, Joan said, "Before you quit, why don’t you write one comic you are proud of?"

That comic became the Fantastic Four. From there, Stan would go on to create some of the most beloved titles in the business. He would also become the most recognized cameo-ist while he was at it. Joan also got into the acting action a bit, as a voice actress in two '90s Marvel cartoons -- Miss Forbes in Fantastic Four and Madame Web in Spider-Man. She also played herself in last year's X-Men: Apocalypse. And she was a writer too, having published a novel titled The Pleasure Palace in 1987.