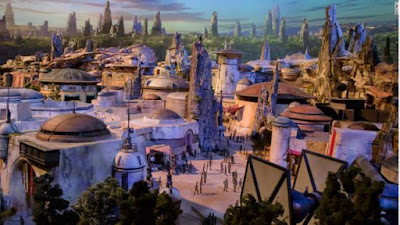 STAR WARS LAND 2019
That galaxy far, far away is about to get
a lot closer for "Star Wars" fans.
Disney on Saturday unveiled plans for a "Star Wars"-inspired hotel, which Walt Disney Parks and Resorts chairman Bob Chapek called "the most experiential" luxury resort they've ever done.

"It's unlike anything that exists today," Chapek said at a panel during D23 Expo, the company's Anaheim-based biennial convention. "It is 100% immersive."

The mock-ups shared by Chapek showed guests in "Star Wars" attire and rooms in which "every single window has a view into space."

The hotel will be built at Walt Disney World in Orlando.

"We feel this could be the start of something very, very big," Chapek said.

There is not yet a target opening date for the "Star Wars" resort. 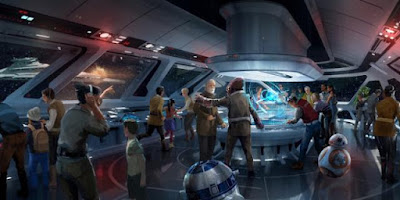 "The name represents all the unknown adventure [inside the lands]," Chapek said.

The 14-acre lands will also feature a cantina and cameos from "Star Wars" characters like BB8, Chewbacca and Captain Rex, a character from Star Tours, a former Disney simulator ride.

Chapek called the lands "a living place" where "your choices matter."

The first expansive look at Galaxy's Edge came at the start of D23, when a model of the land was put on display to the public.

"Star Wars": Galaxy's Edge will open in 2019, first at the Anaheim, California location then in Orlando, Chapek said.

The Parks and Resorts panel followed what was already a "Star Wars"-filled weekend at D23.

Earlier on Saturday, the stars of the upcoming "Star Wars: The Last Jedi" appeared to present a new behind the scenes look at the making of the film at a star-packed presentation. And on Friday, Mark Hamill and the late Carrie Fisher were honored as Disney Legends. When Disney goes, Disney goes all out. After sharing a sneak peek of the Star Wars Land attractions coming to both Disney World and Disneyland, we finally got an official name for it and even more facts at 2017's D23 expo. Walt Disney Parks and Resorts Chairman Bob Chapek broke the news that the sections of the park themed after the movies will be called Star Wars: Galaxy's Edge. We learned even more information about what's to come and put it together so fans can get their facts straight and start planning their adventures for the 2019 opening.

1. The lands will feature two major attractions. Disney says these attractions will "put guests in the middle of a battle between the First Order and the Resistance." The rides promise to be fully immersive experiences for park-goers. They will be the largest single-themed land expansion at the parks, at 14 acres each.

2. One attraction will be huge! One of the two main attractions is designed to make guests feel like they're on a Star Destroyer inside a hangar bay. Disney says that "it's an attraction built on a scale we've never done before."

3. The second attraction will give guests the opportunity to fly the Millennium Falcon. Guests will be working to complete a mission and will pilot the ship, shoot blasters, and prepare for hyperspace. How you do on the mission holds and how you perform the skills will earn extra galactic credits. Bringing the ship back "banged up" could put you on the list of a bounty hunter. "End up on Harkos's list and you may face a problem if you show up at the local cantina," says Disney.

4. There will be a cantina! Rex, the troublesome pilot from the previous version of another Disney attraction, will take on a new role in this new land as the DJ at the cantina.

5. There will be characters everywhere! Guests will also encounter many familiar faces inside Star Wars: Galaxy's Edge, like BB-8, Chewbacca, and even members of the First Order.

6. The opening date is just around the corner. Star Wars: Galaxy's Edge will open in 2019, so fans just have to wait a bit longer! The Galaxy's Edge will first open at the Disneyland Resort and then later in the year at the Walt Disney World. There are no specific dates - yet. 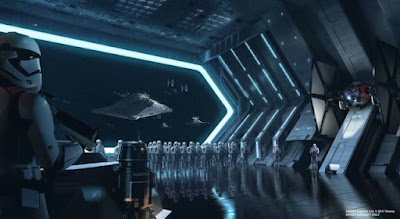