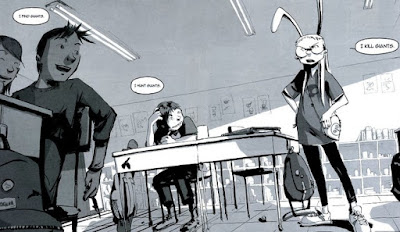 I   K I L L   G I A N T S
The award-winning IMAGE comic book series, I KILL GIANTS, tells the story of a young, fantasy-obsessed girl who believes that the creatures of her favorite RPG are real, some of them are dangerous, and they need to be stopped.

The series, created by writer Joe Kelly and artist J. M. Ken Niimura, was a critical darling in 2008. It was only a matter of time before it was scooped up and made into a live action project.

I KILL GIANTS is the feature film debut of Academy Award winning short film director Anders Walter (HELIUM). The script is by Joe Kelly, himself and the film stars Zoe Saldana (AVATAR), Imogen Poots (GREEN ROOM), and Madison Wolfe (THE CONJURING 2).
Posted by anim8trix at 12:30 AM