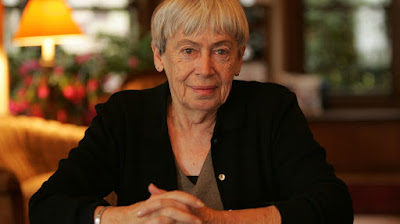 Ursula K. Le Guin
Reknown Science Fiction Author
(October 21, 1929 - January 22, 2018)
[Source: Syfy] Noted feminist author of science fiction and speculative fiction Ursula Le Guin, died on Jan. 22 at her home in Portland, Oregon. She was 88. Her son, Theo Downes-Le Guin, told the New York Times she had been in poor health for several months.
Born in 1929, the daughter of two anthropologists, Le Guin showed an early interest in science fiction but put it aside to attend college, where she ended up getting a master's degree in romance literature of the Middle Ages and Renaissance. She wrote five unpublished novels, which were deemed "too inaccessible" to publish. She then turned to genre.

Her first science fiction novel, Rocannon's World was published in 1966, and blended technology and traditional heroic fantasy elements. It was the first book in the Hainish cycle, and gave birth to the term "ansible," a fictional device for instant communication. It has since been used in the works of dozens of other authors, including Orson Scott Card. Over the course of her career, Le Guin would publish over 20 novels; 12 books of poetry; over 100 short stories; seven collections of essays; 13 children's books; and a guide for writers.

Le Guin's best-known work was The Left Hand of Darkness, a novel set on the planet Gethen, whose population has no fixed sex. The novel focuses on themes about the way sex and gender play roles in culture and society, and is noted as one of the first examples of feminist science fiction literature. It won both a Hugo Award and a Nebula Award for best novel.

Other notable works in Le Guin's library include the Earthsea series, which consists of six novels and eight short stories; The Lathe of Heaven, in which a character's dreams alter past and present reality; The Dispossessed, which goes into the mathematical theory used to create an ansible; and Lavinia, a book that focuses on a minor character in Virgil's Aeneid.

Despite her large catalog, very few of Le Guin's works have been turned into films or TV series. An adaptation of The Lathe of Heaven was made for WNET in New York in 1979. Made with Le Guin's involvement, she considered this to be the only good adaptation of her work. In 2002, A&E also did a version of the same book. 2004 saw an adaptation of Earthsea done for Sci Fi that Le Guin thought "whitewashed" many of her diverse characters. Hayao Miyazaki's son, Goro, created an animated version of the Earthsea books that became 2006's Tales from Earthsea.

Le Guin is survived by her husband, Charles Le Guin, her son Theo, and daughters Caroline and Elisabeth, two brothers, and four grandchildren.
Posted by anim8trix at 5:30 AM