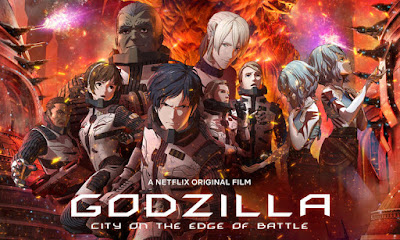 Godzilla: City on the Edge of Battle
Plot Summary: [Source: Wikipedia] Following the events of Godzilla: Planet of the Monsters, the Aratrum is unable to contact Haruo and the rest after their encounter with the original Godzilla. The Captain orders that if drones do not find survivors by forty-eight hours, the Aratrum will withdraw from Earth.

Haruo Sakaki is rescued by a native girl named Miana and has his wounds treated with a strange powder. She belongs to an indigenous tribe called the "Houtua", surviving descendants of humans. The Houtua recover Haruo's surviving team and hold them for questioning. Miana and her twin sister Maina use telepathy to communicate with their guests to understand their reasons for burning their lands.

After the Houtua realize the group was after Godzilla, the twins inform Haruo that their god was destroyed by Godzilla and left behind an egg. With an understanding that Haruo is waging war against Godzilla and not the Houtua, they are released, but the twins accompany them as both protective guides and observers. The group is attacked by a swarm of wormlike creatures, but they are able to fight them off with the twins' help. During the fight, Galu-Gu realizes that the twins' arrowheads are laced with "nanometal", a remnant of Mechagodzilla. They are then attacked by a pack of Servums, but Metphies arrives with some other survivors and drives them off.

Galu-Gu explains that the nanotechnology that built Mechagodzilla somehow survived and in the past 20,000 years, it has steadily self-replicated and expanded itself. With this fact, the Bilusaludo tell Haruo and the rest that they can win against Godzilla with the nanometal, which prompts Haruo and the rest of the crew to remain on Earth and continue the original plan to defeat Godzilla. They manage to make contact with the Aratrum, which takes the few crew members who wished to leave and agrees to stay in orbit. Tracing the source of an energy signature they detected, they discover the nano-materials have rebuilt the former facility that held Mechagodzilla, which Galu-Gu dubs as "Mechagodzilla City".
Posted by anim8trix at 12:00 AM