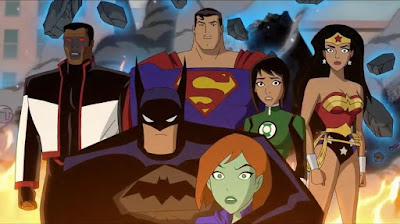 JUSTICE LEAGUE vs. THE FATAL FIVE
[Source: Syfy] This DC animated movie finds the Earth's future hanging in the balance when the Justice League faces a powerful new threat - the Fatal Five. But the Justice League discovers an ally from another time in the peculiar Star Boy - brimming with volatile power, could he be the key to thwarting the Fatal Five?

Fans of the Justice League series starring Kevin Conroy (Batman), Susan Eisenberg (Wonder Woman), and George Newbern (Superman) will be thoroughly excited to hear their old friends are back in action, with some new members to boot. The League has to face a new time-traveling Fatal Five that is hunting the up-and-coming Green Lantern, Jessica Cruz, voiced by Diane Guerrero.

Cruz was first introduced during DC Comics' New 52 relaunch in 2014. It’s a shame Phil LaMarr didn’t reprise his role as the original series Green Lantern, John Stewart, but the new blood is a welcome change.

The trailer, which comes via IGN, didn’t spell out exactly when we can expect to see this bombastic crossover, but Justice League vs. The Fatal Five is likely to drop later in 2019 on Digital, Blu-ray, and 4K Ultra HD.