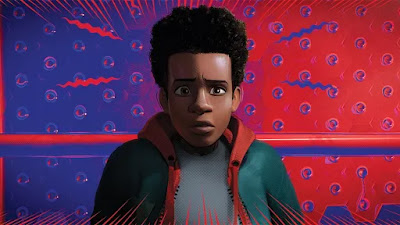 While accepting the award, Lord celebrated what the representation in the movie meant for many. “When we hear that somebody’s kid was watching the movie and turned to them and said, ‘He looks like me,’ or ‘They speak Spanish like us,’ we feel like we already won.”

Sunday’s win capped a strong awards season run for the film, which won the top animated film honor at the Annies, Golden Globes, BAFTA and Producers Guild Awards. It’s one of the biggest awards to date for a title based on Marvel characters, along with “Big Hero 6,” which also won the animated feature trophy in 2015.

“Spider-Man: Into the Spider-Verse” centers on 13-year-old Brooklynite Miles Morales, who becomes one of many Spider-Men, is rated PG and marketed toward families. Shameik Moore voiced Morales as an admirer of Spider-Man. The movie was specifically created to have a unique look that combined computer animation with traditional hand-drawn techniques.

“Spider-Man: Into the Spider-Verse,” which carries a $90 million budget, was an unexpected box office success and wound up grossing nearly $360 million worldwide. The film was directed by Persichetti, Ramsey and Rothman from a screenplay by Lord and Rothman and a story by Lord. Miller and Lord produced along with Avi Arad, Amy Pascal and Christina Steinberg.

Ramsey became the first African-American director to win an Oscar in the category.

Critics were dazzled. Peter Debruge said in his review for Variety: “The brilliance of Sony’s snappy new animated “Spider-Man: Into the Spider-Verse” shows itself in the project’s uncanny ability to simultaneously reset and expand all that has come before, creating an inclusive world where pretty much anybody can be the superhero … even you!”

“Spider-Man: Into the Spider-Verse” topped a pair of Disney titles — “Incredibles 2” and “Ralph Breaks the Internet” — along with Wes Anderson’s “Isle of Dogs” and Japanese adventure “Mirai.” Of the 17 Oscars given out since the category was created in 2001, Disney has won a dozen, including “The Incredibles” in 2005 and the last six: “Brave,” “Frozen,” “Big Hero 6,” “Inside Out,” “Zootopia,” and “Coco.”

“Spider-Man: Into the Spider-Verse” was only the second Sony Pictures Animation film ever nominated for an Oscar after 2007’s “Surf’s Up.”

As for Marvel movies getting Oscars, there has only been one prior to this year: 2005’s “Spider-Man 2,” which won for Best Visual Effects for John Dykstra, Scott Stokdyk, Anthony LaMolinara and John Frazier by topping “Harry Potter and the Prisoner of Azkaban” and “I, Robot.”

Marvel is up for eight other Academy Awards this year. Marvel’s “Avengers: Infinity War” is nominated in best visual effects and its “Black Panther” is up for seven Oscars, including Best Picture, costume design, production design, original score, original song, sound mixing and sound editing. It won for costume design for Ruth E. Carter, production design for Hannah Beachler and original score for Ludwig Goransson.

Tom Rothman, chairman of Sony’s Motion Picture Group, said in a note to employees, “‘Spider-Man: Into the Spider-Verse’ became one of the few non-Disney films to win the Best Animated Feature Oscar in the history of that award. It’s sweet indeed to see the Academy honor originality, diversity, and revolutionary animated craftsmanship. And it recognizes SPA and Imageworks’ rightful place among the first rank of animation studios, under the leadership of Kristine Belson and Randy Lake, respectively.”
Posted by anim8trix at 12:00 AM