APRIL AND THE EXTRAORDINARY WORLD 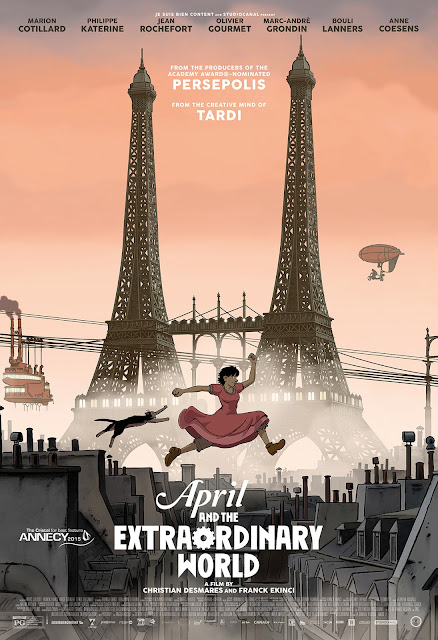 APRIL AND THE EXTRAORDINARY WORLD
From Christian Desmares and Franck Ekinci
From the producers of the Academy Award-nominated PERSEPOLIS
▶ Watch the New English Dub Trailer
Paris, 1941. A family of scientists is on the brink of discovering a powerful longevity serum when all of a sudden a mysterious force abducts them, leaving their young daughter April behind. Ten years later, April (voiced by Academy Award® nominee Marion Cotillard) lives alone with her dear cat, Darwin, and carries on her family’s research in secret. But she soon finds herself at the center of a shadowy and far-reaching conspiracy, and on the run from government agents, bicycle-powered dirigibles and cyborg rat spies. Also features a new English dub with the voices of Paul Giamatti, Tony Hale, Susan Sarandon and J.K. Simmons!
Available NOW on Blu-ray/DVD & Digital!
https://bit.ly/3tYcjPA​
Follow @GKIDSFilms for the latest updates
Posted by anim8trix at 12:00 AM