"Duel of the Fates" - Fan-made Comic

What if...
STAR WARS Episode IX used Colin Trevorrow's
Duel of the Fates script instead of JJ Abram's
Rise of Skywalker? One fan dared to find out...
[Source: inverse.com] 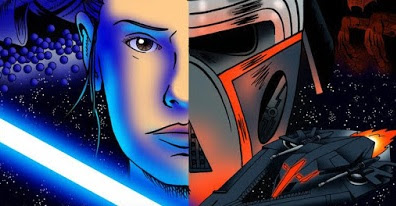 Less than a month after The Rise of Skywalker debuted in theaters, a leaked version of Colin Trevorrow and Derek Connolly’s script for Episode IX hit the internet and within days it was confirmed to be genuine. Now, over a year after that thermal detonator exploded, a new fan-made comic adaptation has brought nearly every single aspect of the Duel of the Fates script to life.

From artist Andrew Winegarner, this speculative comic is an amazing undertaking and gives Star Wars fans a visual sample of what we didn’t get in Episode IX. And in all of that, there’s one pivotal scene that sticks out. Let’s dig in.

Spoilers ahead for Duel of the Fates, a movie that was not made. 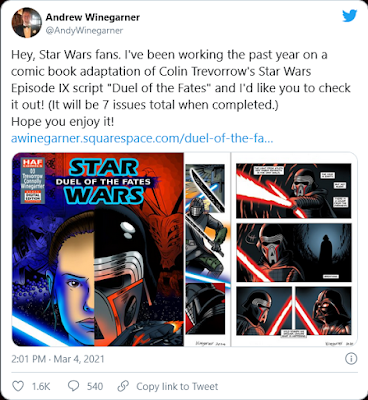 The version of the Duel of the Fates script that leaked in January 2020 featured several huge differences between what we saw on screen in The Rise of Skywalker, including a Poe/Rey romance, a much bigger role for Leia, a return to Courscant, and, most chillingly, an utterly unredeemed Kylo Ren.

Following an amusing fan-made animated version of the script that popped-up last year, an impressively epic fan-made comic version of Duel of the Fates has just been released by the aforementioned Winegarner. For nearly a year, Winegarner has been working on a professional-looking comic book adaptation of Duel of the Fates, which he initially described as a kind of “Infinities” take on the unfilmed script. (Infinities was an early-aughts project from Dark Horse Comics that imagined “What If?” alternate Star Wars timelines.)

The result of Winegarner’s labor is super-compelling. (Check it all out here.) Although he hasn't released all of his fan-made comics adaptation, and much of it remains uncolored, what we can see is impressive — most impressive.

That said, seeing the entire story of Duel of the Fates rendered this way does force us to confront one very important truth: This story was going to be dark. Just how dark? As the comic’s art showcases, it would have featured a scene in which Kylo Ren slices Rey in the face with a lightsaber, and blinds her. As the script notes:

By the end of this script, Rey Solana (not Palpatine!) is fully healed by the Force, but as Dom Nero of Esquire pointed out back in 2020, the thing that sticks out the most in Duel of the Fates is “the bad guys win a lot in this script.” And when you see Winegarner’s take on these scenes — lifted straight from the leaked script — it’s powerful and brutally shocking. 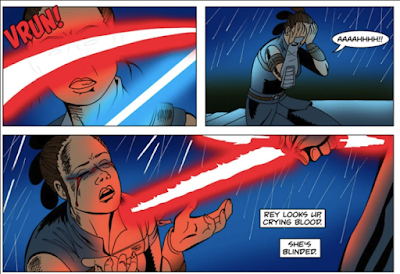 In various fandom circles, there’s a knee-jerk reaction to details about unmade versions of big sci-fi fantasy movies. Often, that reaction is: The unmade thing would have been “better than what we got.” In some cases, this automatic bias results in one-sided documentaries. And yet, this tendency continues in all sorts of fan circles. How do you end up with the actual release of The Snyder Cut without this pervasive phenomenon?

Overwhelmingly, this feeling became the critical consensus of the Duel of the Fates script, too. Just weeks after The Rise of Skywalker, an alternate version in which Rey wasn’t forced to adopt either the Skywalker or Palpatine names felt like a revelation. All the characters had something cool to do, and Kylo Ren was made into the worst villain of the entire saga. Plus, Rey got that sick double-bladed lightsaber we always suspected she deserved.

Now it’s over a year later, and getting upset about The Rise of Skywalker feels slightly silly compared to everything that’s happened in reality since its release. Conversely, the existence of the Duel of the Fates script is still fascinating and is easily the most compelling path-not-taken in all of Star Wars history. The new fan artwork from Winegarner isn’t just a labor-of-lo
ve — it also feels like a catharsis. 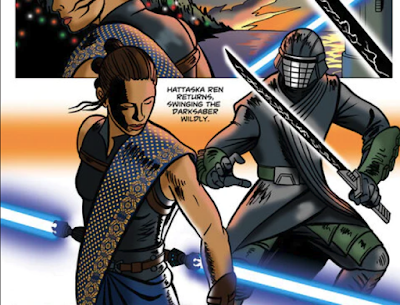 After the polarizing The Last Jedi, The Rise of Skywalker offered up a unifying “meh” response from most Star Wars fans. But can you really say that Rey getting blinded by an irredeemable Kylo Ren would have connected with audiences? Do you think little kids would have liked to see Rey get blinded by Kylo? Could we have really loved a movie in which Ben Solo goes out the villain? The notion that “Rey from nowhere” could have balanced the Force, and defeated the dysfunctional Skywalker family is still compelling. But the moment where Kylo slices Rey in the face? It feels off-brand, even for the darkest of Star Wars concepts.

Just like the rumored deleted scene in which Kylo Ren supposedly tortured Chewbacca, there’s something about Rey getting sliced in the face by a lightsaber that feels wrong. Within the context of this particular script, it works. But Star Wars is not Matrix Revolutions. Rey is not Neo. Even little kids playing with Star Wars toys know you keep lightsabers out of other people’s faces. Then again, fan artist Winegarner points out this kind of thing has its roots in ancient mythology, which Star Wars loves to crib from all the time. “Oedipus blinded himself. Samson was blinded in the Bible,” he tells Inverse. “I do think that Rey being blinded would [have] played on the big screen. The exact same thing was done to Kanan Jarrus in Rebels.”

No matter where you fall on the issue, there’s no question: Duel of the Fates is a fascinating piece of Star Wars ephemera. And the new fan-made comic book adaptation from Winegarner is cool as hell. Somewhere, in another dimension, this story and The Rise of Skywalker could have fused to give us the perfectly balanced Episode IX. Then again, maybe the Force was never supposed to be balanced...

You can read Andrew Winegarner’s

Duel of the Fates here.