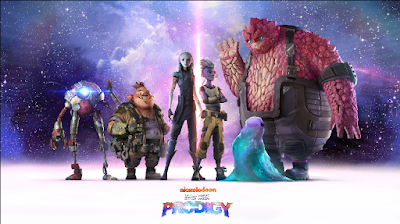 STAR TREK: Prodigy
ViacomCBS today announced that the Star Trek Universe will head to Paramount+. The news was revealed during ViacomCBS’ Investor Day event for its highly anticipated new streaming service. Included within the line-up is the upcoming all-new animated kids’ series Star Trek: Prodigy which will now premiere on Paramount+ in the U.S. in 2021. Developed and produced by Nickelodeon and CBS Studios, Prodigy is the first Star Trek series for the kids and family audience and will bow later this yearon Nickelodeon.
A first-look image of the Star Trek: Prodigy bridge crew was also released today.  In Prodigy, six young outcasts know nothing about the ship they have commandeered – a first in the history of the Star Trek franchise, but over the course of their adventures together, they will each be introduced to Starfleet and the ideals it represents. Kate Mulgrew was previously announced as reprising the iconic role of Captain Kathryn Janeway to lead this brand new Prodigy bridge crew.
Posted by anim8trix at 12:00 AM