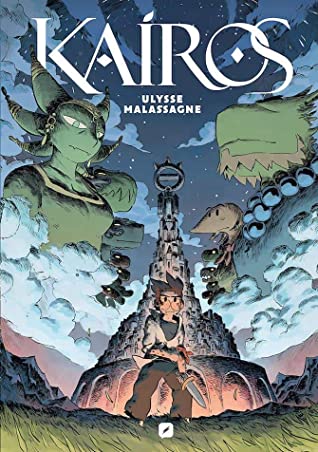 K A I R O S
"One of the best animated adventures out there is not a movie or a TV series... It is a Trailer for a Graphic Novel! As of this posting, there are no further plans to animate the entire comic. Check out the trailer below and ask if Studio Ghibli had anything to do with the making of this awesome animation!"
- anim8trix
In Kairos, French graphic novelist Ulysse Malassagne turns the typical damsel-in-distress narrative on its head. With stunning art, epic battle scenes, and unexpected plot twists, Kairos forces you to question where to draw the line between hero and antihero.
Nills and Anaelle are looking forward to their first night in their rustic cabin in the woods. But the couple’s idyllic vacation is suddenly thrown into turmoil when a strange flash of light bursts from the fireplace. A portal appears, and out of it spill dragon-like creatures that are armed to the teeth. They grab Anaelle and flee back through the portal, leaving a distraught Nills with a sudden decision: stay behind, or leap through after her?

He leaps. And that’s when things get really weird.
▶ Watch the Trailer
Posted by anim8trix at 12:00 AM